The bus ride from Mae Sot to Tha Song Yang started at 09:30am and ended two and a half hours later, having taken us through eighty-five kilometers of mostly rural farmlands. 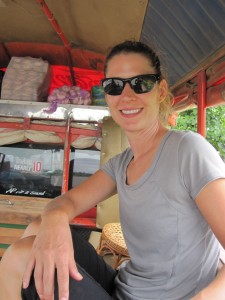 There are two categories of bus we have traveled on so far. The first is what most Americans would think of as a bus. You know…the Greyhound sort of thing.

The other is something like a small-sized pickup truck with an extended bed, in which are mounted two to three benches on the long axis of the bed, and over which is mounted a roof. The sides are open, with some canvas that can be dropped in case of rain. Many, many people can be crammed into the sitting area of this type of bus. Even more people can stand on the bumper and hold onto the rails for dear life as the driver screams along winding roads as fast as the bus can go.

To date, we have witnessed no deaths or injuries.

We have also witnessed no accidents involving the motorbikes that everyone and their sister, father, mother, nice, nephew, grandma, and pastor drive around here. There are more motorbikes in Thailand than cars or trucks, by a significant multiple. They are everywhere and constant. (When I refer to motorbikes, think mopeds with standard transmissions and a bit more horsepower.)

How many people can you get on one motorbike? If you said two, you lack imagination. We have seen families of four on a single bike, weaving through traffic with bags of groceries for balance. Children still in the crawl stage of life are perched in front of the driver, their hands on the instrument console for purchase.

So, how many people can you get on a single motorbike? I am going to guess six, but I may be under-estimating.

Back to the bus ride to Tha Song Yang…

There was a box made of wood and screen in the forward bed of the pickup bus. We figured something alive was inside, and learned we had guessed right 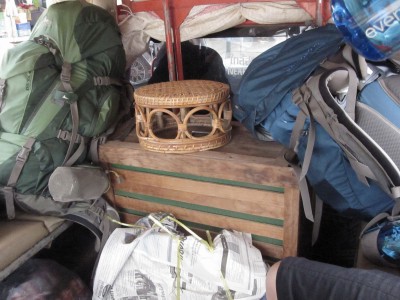 when it began crowing the last third of the trip.

The driver had only two speeds: as fast as possible with the gas pedal to the floorboard, and dead stopped to pick up or drop off passengers.

So far, the math for buses seems to be one baht per person for every kilometer traveled, and forty kilometers of progress every hour (accounting for stops). There has been variance, but as rules of thumb they seem to work fairly well.

A little over half the distance between Mae Sot and Tha Song Yang, we passed the Mae La refugee camp, which holds in excess of 60,000 Karen refugees from Burma (Myanmar). The camp extends a handful of kilometers along the west side of the two lane highway. We would return to the camp by motorbike the following day.

Before and after the camp, we passed through police checkpoints.

One more thing on the buses…There is a buzzer button in the roof of the passenger area that is pressed to let the driver know you want out. Nice feature.

At kilometer marker 85, we pressed the buzzer and dismounted the bus at the Thasongyang Hill Resort, just north of the town of Tha Song Yang, on Highway 105. This is where we stayed our two nights in Tha Song Yang. (You can read about the hotel by clicking here.) 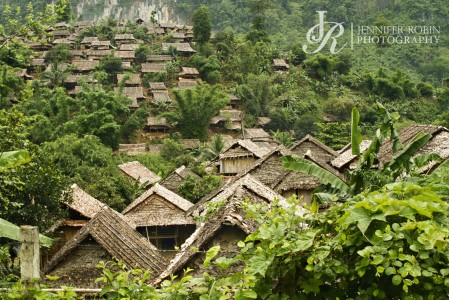 After checking into the hotel, where we rented a small bungalow, we walked to a roadside restaurant just a hundred meters to the north. The folks here became very accommodating to our vegan diet, making ever-more-tasty custom meals for us. The wife of the family that owns the place was very good at helping us with learning more Thai. (You can read more about the restaurant by clicking here.)

After lunch and a nap, we took a motorbike and headed a couple kilometers into the village of Tha Song Yang to snag some soap, shampoo, beer, and snacks; and to have a look around.

Tha Song Yang is a nice little town, and the people are generally friendly. Unlike Lopburi, Sukhothai, and Mae Sot, it didn’t smell so bad. Also, it wasn’t plagued with stray dogs and cats. Jen liked Tha Song Yang and the surrounding area a great deal. If the lodging options had been better, we would have stuck around a while.

Cicadas can be heard everywhere we’ve been so far, day or night; but they were particularly impressive at the Thasongyang Hill Resort at night. They were in trees and bushes next to the bungalow, and on the outside walls of the bungalow. One even struck Jen in the forehead while in flight. The next morning, Jen had a small scrape where she had been struck. Although cicadas are considered harmless, and Jen probably got her scrape some other way, we are still calling her injury the “Cicada Incident.” (You can hear the cicadas by clicking here).

The next morning, we motorbiked back into town to get something to eat and talk to the police.

For the eating part, we stopped at a small food stall, where we struggled to get across the vegan thing. After a bit of work, we ended up with fried rice of a sort for breakfast.

The police part had to do with ascertaining whether or not there would be an issue with Jen photographing the Mae La refugee camp from the highway. We 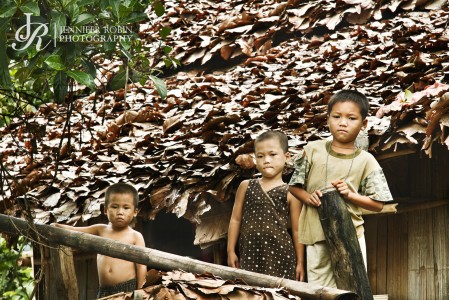 had read and heard about the sensitivities surrounding the camps, recently heightened by word of Thailand’s efforts at negotiating with the Myanmar government a return of refugees. We didn’t want to motorbike thirty kilometers to be told no; or worse yet, to run afoul of the military or police after having taken some photos. With the help of a young Thai guy at the station who managed some translation for us, we were told that taking photographs from the roadside would not be a problem.

The motorbike ride to Mae La was interrupted for about an hour by a rain storm, during which we took shelter under one of the many covered areas that dot the roadside in these parts. This one was by a police checkpoint.

After the rain let up, we continued on to Mae La, where we stopped at several points along it’s five-or-so kilometer length for Jen to capture images.

Mae La is obviously very crowded, with huts crammed into every available space between the highway that defines its eastern edge and the limestone cliffs that define it’s western edge. Those folks on or near the roadway were mostly amused by Jen taking pictures. The children in particular thought she was funny.

Eventually, we received the attention of a guard at one of the photo stops, who came over to check on what we were up to. He was a polite guy who did not interfere, but his uniform differed from those of the police running checkpoints on the highway, which indicated to me that the attitude of the police toward Jen taking photos may not extend to those running the camp. So, we moved on to another spot out of sight of his post.

The next day, we moved north to Mae Sariang, again by pickup bus. 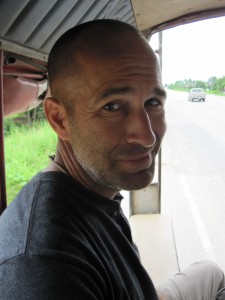 This ride took three-and-a-half hours, through 130-or-so kilometers of increasingly hilly countryside. Much of the road was torn up by construction. When the dust mixed with some rain, we ended up with a lot of road grime.

Of course, the torn up road and rain had no impact whatsoever on our driver, who continued to be fast-as-possible.

Our co-travelers on the pickup-bus consisted, at various times, of the following characters:

– Monk man, who got the prime spot in the passenger seat of the air conditioned cab. It pays to be a monk.

– Aloha Man, who asked us where we were from, and responded with an emphatic “aloha” when we said Hawaii.

– Throw-Up Girl, who was chucking over the side of the bus for a while, with her boyfriend thumping her back for aid and comfort.

– Pick-Up Boy, who rode the whole way with us, and managed to score a phone number from a young girl toward the end.

– Tuberculosis Man. This guy got on with a young kid, and then started hacking into a canvas bag he was carrying. This probably wouldn’t have caught much of my attention, were it not for him also being a double amputee (both arms just below the elbows) and blind, as well as carrying several days’ worth of dirt. The whole package made me thankful for the full treatment of vaccines Jen and I had gotten before our departure (yeah…I know…TB ain’t got no vaccine; and it ain’t so PC to talk this way about disabled, impoverished people).

Mae Sariang is a place that has been discovered by the tourist trade, and is not the better for it. Prices are high compared to sister towns. Thai and English share space on signs and menus. Most of the people we encountered took our money with a bit of attitude. Service had to be requested, as it was not generally offered.

On the plus side, Mae Sariang is cleaner than Sukhothai and Mae Sot, is not stinky, and didn’t have stray dogs or cats running around.

The combination of unattractive lodging and touristy town caused us to change plans and move on the next day. 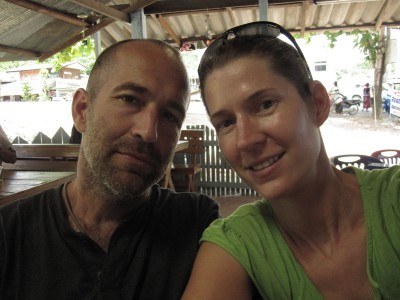 And now we are in a town north of Mae Sariang. It appears relatively untouched by tourism: no English menu translations in sight, the guest books at the place we are staying have no English entries, almost no one speaks a word of English. So far, it holds promise as a nice place to stay for a few days.

Consequently, we do not want to divulge it’s name and risk inviting others to stay here and ruin it.

There is a cave nearby. We went there today. Not very interesting. No one else was at the attraction. We had to wake up the ticket counter girl, who was asleep on a mat behind the counter.

Perhaps these are good signs.

By the way, Jen has now been kicking my ass in gin…over and over again. 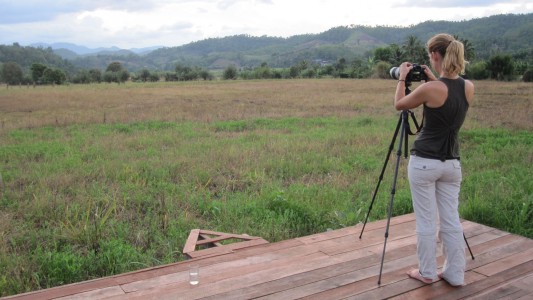 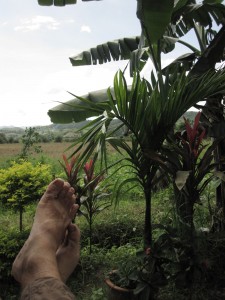 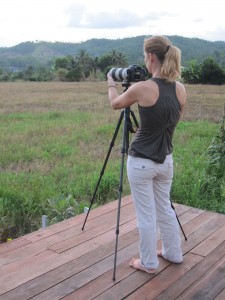 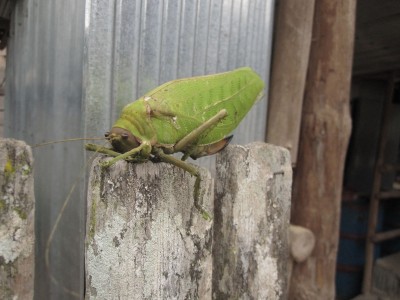 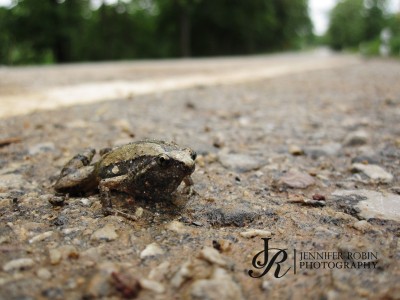 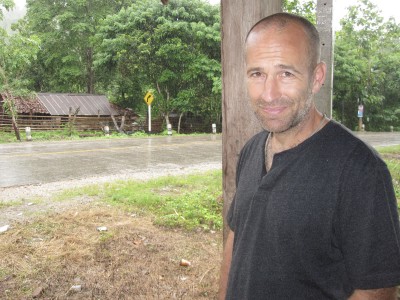 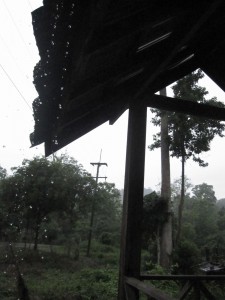 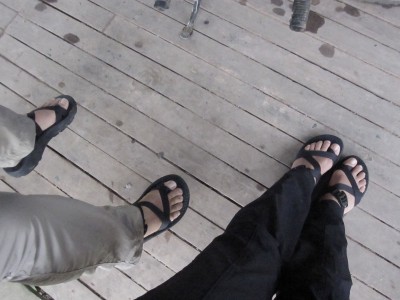 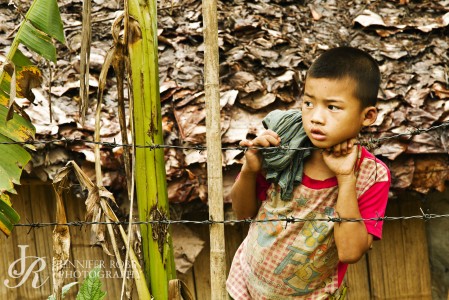 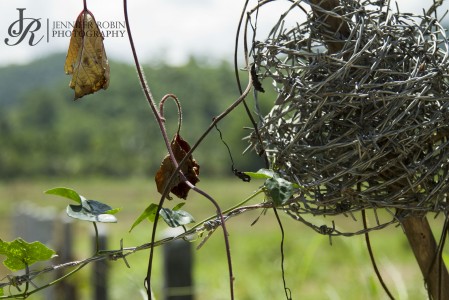 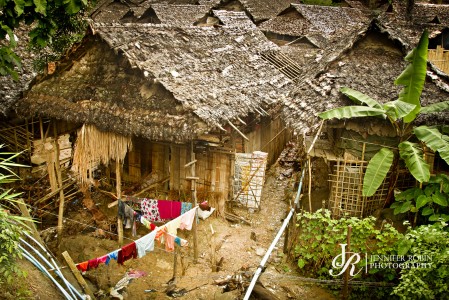 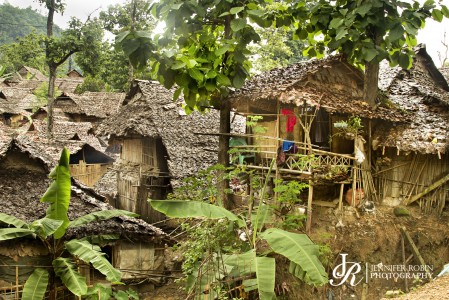 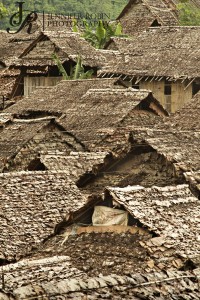 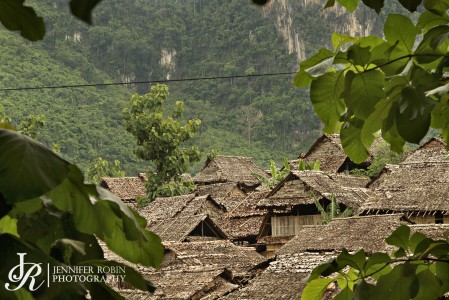 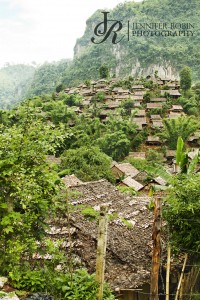 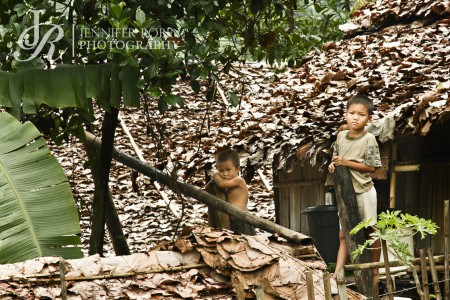