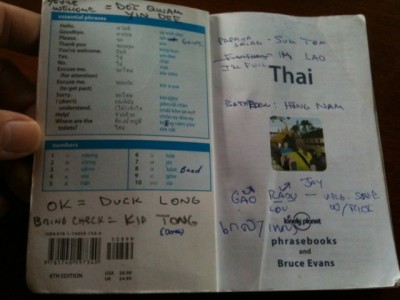 We are equipped with a Lonely Planet phrase book. It’s nicely sized for small cargo pockets.

Of course, the Thai language has it’s own characters, which look nothing like the English alphabet. So, you are relying on the transcription of Thai vocal sounds into an English representation. This can be problematic.

Let’s look at another example…

Jen and I do not eat meat. When we first arrived in Thailand, we had read that the Thai word for vegetarian is “jair,” which is pronounced along the lines of “jay.” We later learned that the word we were attempting to say more literally means “vegetable,” not “vegetarian.”

There is a similar-sounding Thai word, also pronounced along the lines of “jay,” but with a slightly different inflection. That is the word for “understand.”