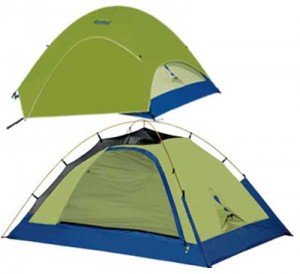 In Costa Rica’s Corcovado National Park, and again in Kauai’s Na Pali Wilderness State Park, we used a Eureka Pinnacle Pass 2XTA tent.  In Corcovado, it sustained two hours of serious, serious rain without so much as a single drip.

The only negatives are its weight at over 6 pounds, and that the stitching gave out on one of the recesses for the poles (it could have easily been avoided by a better use of webbing reinforcement in the construction).

Nonetheless, it is a winner.

We have since used this tent in extremely challenging conditions.  For example, we used it on a three-week sea kayaking trip in the Bahamas, during which we weathered a hurricane on a deserted cay (island).  The tent held up throughout — bowing and bending under extreme winds, but never breaking or leaking.  If it wasn’t for the weight, which exceeds backpacking weight, this would be our tent of choice.  Great job, Eureka!