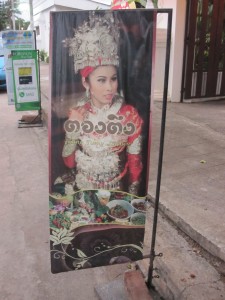 This place is located just north of the Laluna Hotel and Resort, on the southern end of Chiang Rai. The sign is not in English. It’s on the west side of the road, with a kind of white brick archway entrance.  Please take a look at the photos for reference if you are looking to find it.

We came to this place by asking a desk person at the Laluna Hotel for a recommendation on a restaurant that was used by locals, and a place at which he ate.

We arrived before the rush, apparently, as we were initially the only customers. By the time we left, there was a handful of additional customers – all Thai.

The food was decent. Nothing remarkable, but not bad. We got a vegetable stir fry and a vegetarian soup bowl, along with two bowls of rice and two large bottles of beer. The cost came to 308 baht, which ain’t cheap, but also ain’t stupid-expensive.

The best thing about this place was trying to work on some Thai language skills. The girls that work here started playing along, and we may have learned a thing or two – like how I have been totally screwing up the Thai phrase for vegetarian (I’ve probably been saying that I have herpes or something like that).