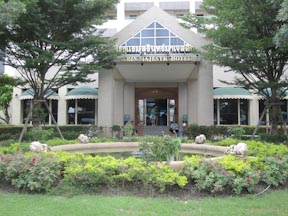 We stayed at this hotel after a long day of driving, and just wanted some place to stop for the night. Whether it is a good or bad selection for Surin is not something to which we can speak, as we didn’t search further.

The hotel complex consists of a main, five-story building comtaining the lobby and rooms; a pool out back; and a separate restaurant building. The hotel is inexplicably located next to the city bus station.

The room had a.bathroom with self-flushing Western toilet, queen bed, small balcony, small refrigerator, and tile floors. It smelled a bit musty when we checked in, but aired out eventually. Wireless internet access was included, but it was intermittent at best.

We paid 900 baht for a standard room, which is in the somewhat pricey range for Thailand overall. 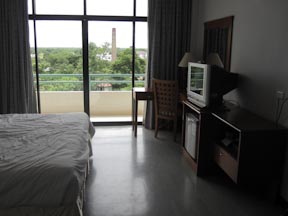 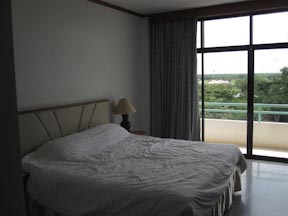