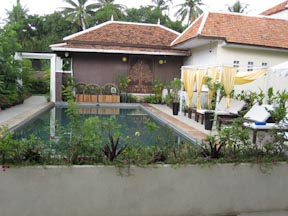 The Sanctuary is located on the northern end of Battambang. It’s far enough out that getting your own wheels is a good idea (on our first stay, we rented a motorbike from a shop called Gecko for $8 a day – which we haggled to $7 a day for a multi-day rental; on our second stay we rented a motorbike from the Sanctuary for $5 a day). The alternatives are to rely on tuk-tuks (about a dollar each way into town) or hope for rides in the hotel’s vehicle.

The Sanctuary is on a decent-sized piece of ground, and walled. Consequently, it feels private.

The facility consists of a handful of rooms in a single-story building, constructed so as to give each room a bungalow-like feel (the bungalows could be described as semi-attached).  There is an open-air reception building, an open-air restaurant, and an outdoor pool. The grounds are nicely landscaped. The facility is fairly new, and consequently looks well-maintained.

Both times we stayed here, we were in a room with a king bed. It was large, with a main bedroom, a large storage closet, a bathtub room with a larger corner tub, a separate shower and toilet room with a large shower and a Western-style toilet, and a small outdoor patio. The furnishings were very nice, including a desk and indoor seating. The room had air conditioning, a small refrigerator, a hot water pot for coffee, and a television with DVD player. The room was clean; comfortable; spacious; and fairly quiet, given the nearby monastery and some next-door construction.

The staff was exceptionally attentive and pleasant, without being intrusive.

Wi-fi Internet access was included with the room charge, and was about the best we had experienced in our travels in Southeast Asia.  It certainly beat hell out of anything Australia had to offer.

The hotel’s restaurant is called Oh, Yeah! Its dinners were a bit pricey, but of good quality, making the restaurant a workable option if you don’t want to head into town.  The breakfast was decent and plentiful, and was included with the room.

Overall, The Sanctuary is one of the best places we stayed during our travels, so much so that we returned a second time for a month. It is highly recommended.

For all this, the published rate for our room was $64 a night. That ain’t cheap. Due to the extended duration of our two stays, we were able to negotiate a lower rate, but it still wasn’t cheap by SE Asia standards. Nonetheless, we thought it was well, well worth the expense. 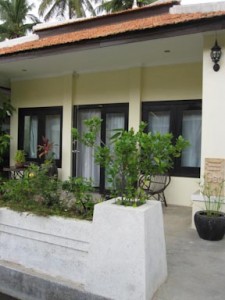 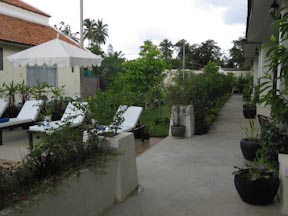 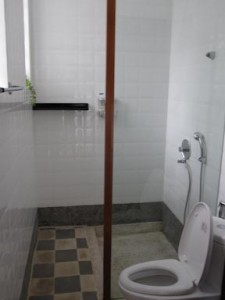 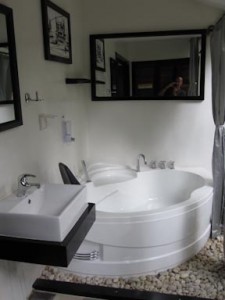 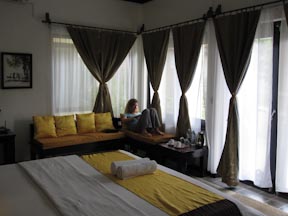 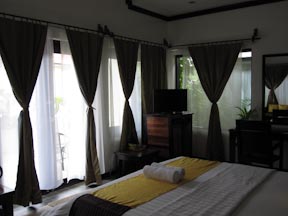 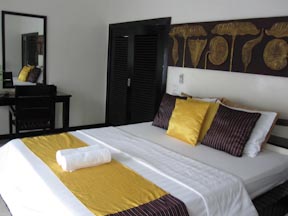