The Suvarnabhumi Airport is a long ways east of Bangkok proper. It takes well in excess of and hour to transit between the two by taxi. So, if you just have an overnight layover, and don’t want to spend hours in a taxi, you are stuck with the limited hotel options near the airport.

That was our situation the night before leaving SE Asia for Australia.

Before arriving, we did Internet searches, paying particular attention to reviews on sites like Agoda, TripAdvisor, and Travelocity. The Novatel Suvarnabhumi Airport Hotel the highest ratings, but it also had the highest price at US $200 for a basic room. Another place, the Floral Shire Resort, had decent if imperfect ratings, and a much more attractive price of US $60 for it’s larger rooms.

We booked a room at the Floral Shire Resort through Agoda. When we actually arrived, it turned put to be a dump.

The Floral Shire is a few minutes drive from the airport, down a narrow lane lined with run-down buildings and eating stalls we’d never eat at, for fear of illness. By the time our taxi pulled up to the hotel, we were thinking, “What the F**k!” the exterior of the hotel, however, looked OK; so we were now thinking that it might be OK – that it might be an acceptable accommodation with the misfortune of being surrounded by a world of shit. Such thoughts were soon shattered.

The woman running the desk was abrupt and lacking any personality. The guy who carried Jen’s pack to our fourth floor room was also a walking piece of cardboard. The room smelled. The walls were dirty and water damaged. The furniture was what you might see in the dormitory of a poor state college. Add to this the lack of a nearby dining option that looked worthy of the standard Thai “Good Food, Good Taste” sign, and we just wanted to walk out.

And that’s just what we did. Within five minutes of walking into the room, we hauled our stuff down to the first floor, told the check-in woman that the place was terrible, and left – tossing our prepayment into the garbage. Yes, it’s bad enough that it’s worth losing US $60 to escape.

Having hired a second taxi, we went to the Novatel Suvarnabhumi Airport Hotel, located on airport grounds.

From the outside, this hotel looks like it might also be a disaster – it’s a dirty box, with windows that reminded me of a Motel 6. The inside, however, is an entirely different story – big lobby, nice furnishings, professional staff, decent rooms. Our room had furnishings along the lines of a Marriott, a king bed, mini-bar refrigerator, air conditioning, bathtub, shower, and Western-style toilet. The Marriott comparison is a good one.

So, the rooms and common areas are good.

The restaurant prices could be overlooked if there were nearby alternatives, but there aren’t any within any definition of walking distance. They have you by the short hairs, and pull as hard as they can.

I did discover a bar alternative, though. Out the back door of the lobby, across the road, just inside the parking complex is a tiny 7/11 store. It’s hard to spot, but it’s only about a two minute walk. The store carries the standard array of beer and snacks, at normal Thai prices.

Of the two hotels, I’d still rather pay the expense for the Novatel; but I feel violated.

By the way, all the photos are of the Novatel hotel.  We couldn’t stomach sticking around the Floral Shire long enough to take pictures of it. 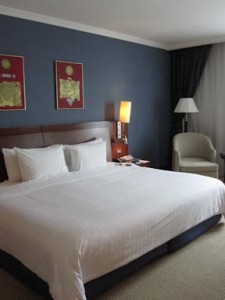 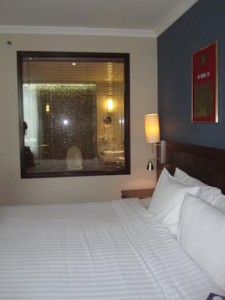 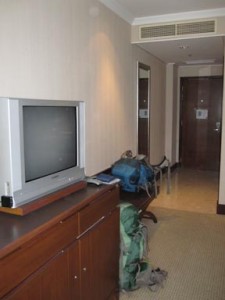 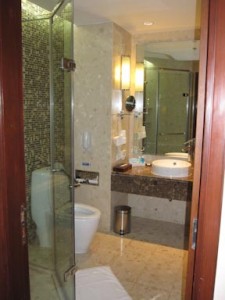 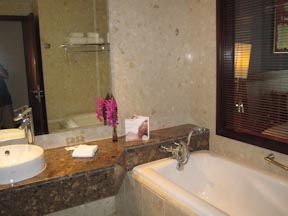 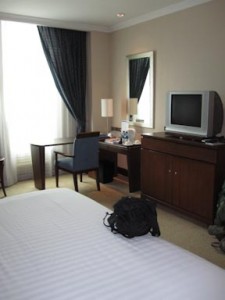