Flavors of India is located in the central business district of Battambang, on the west side of the Sangker River. It’s located on one of the half-streets – 2-1/2 street in this case – that are closer to being alleyways than streets.

We have eaten here on three occasions, having the vegetarian thali plate each time. The food was good, which is what kept bringing us back. It was also nice to have a break from what has become a somewhat monotonous Khmer and Thai diet.

The pricing is high when compared to our bellwether, The Smokin’ Pot; but acceptable given the quality and quantity of food received in return. A dinner of two thali plates, with no drinks, ran us $10 US; and gave us enough food that we couldn’t finish it all.

We would continue to go here, except there is something strange about the personality of the staff. We can’t quite put our fingers on it, but each time we go, we walk away saying “that was weird,” and debating whether or not we should ever return.

The first visit, it was the complete lack of discernible friendliness on the part of the three young Indian males that run the place – a trend that continued into subsequent visits.

The second visit, it was the strange reaction I received when I brought payment to one of the men, and asked for some change to be returned (which still left a tip, and tipping is not an expectation in Cambodia).

The third time, it was the unhappy look of the young Cambodian girl who functions as waitress and bus person, after I left a tip with her. This young woman is the most demur Cambodian female we have met, and I don’t think that her meekness is an indicator of good staff dynamics.

So, we like -but don’t like – Flavors of India. And we are uncertain as to wether we will – or should – ever return. 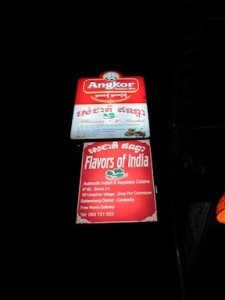 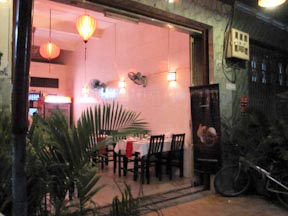