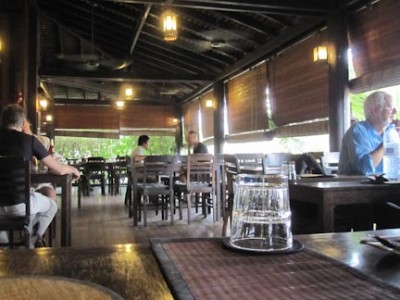 We went here the first time for two reasons – we had just gotten into town and needed someplace to eat within walking distance of our hotel, and the Sugar Palm is an “Our Pick” in the Lonely Planet Guide.

The main dining area is upstairs, and it’s decent enough. There’s a wooden balcony with outside seating, and the ceiling is a high, expansive thing.

The waiter who seated us and then took our order kinda torqued Jen, as he ignored her, even when she said hello. He directed his attention and responses to me. This is a male-centric culture, and men are often the focal point of a conversation, but you’d think that a place that caters to Western tourists would be more attuned to the female half of their customer base.

The only other staff with whom we dealt was the woman who brought our tab and collected payment at the end of the meal. She was very friendly.

The customers at the other tables were exclusively tourists. This is definitely not the place for rubbing elbows with the locals.

We ordered two dishes – a tofu sate and an eggplant dish. The eggplant required some modification to make it vegetarian-friendly (drop the pork and the oyster sauce). The restaurant was willing to accommodate the request.

When they arrived, both dishes were small. The sate was four skewers, with four small pieces of tofu on each. The eggplant dish was a single eggplant that looked like it had been skinned and squashed flat before being baked, on top of which was a layer of small baked beans (I was not sure if they were restaurant-made beans or something from a can). The quality wasn’t bad (it wasn’t great, either), but the quantity was seriously lacking.

Along with the two dishes, we ordered a small (500ml) bottle of water, one large (700ml or so) bottle of Angkor beer, and a single order of about a cup-full of steamed rice. The cost for all was US $15.50. That makes Sugar Palm an expensive place. We could have gotten twice as much food and beer and water, at half the cost, at most anywhere else we’ve eaten in Cambodia.

The second time we went to the Sugar Palm was to confirm our initial observations. Well, they were wrong – the Sugar Palm is a lot worse than we originally thought.

We ordered vegetarian spring rolls, the eggplant dish again, and one of their lemongrass soups. The spring rolls were OK, but the other two items were just plain bad. Oversalted. Not tasty. Gut wrenching. And I am now convinced that the beans on the eggplant came from a can.

With these three items, we got one large bottle of Angkor beer, one large bottle of water, and one order of steamed rice. The bill came to US $24, which I believe makes this the most expensive meal we have had in Southeast Asia. We could have gotten an equivalent meal for half the price elsewhere in Siem Reap. The damned bottle of water cost US $3, for Christ’s sake.

This was also, very likely, the worst meal we have had in Southeast Asia.

When we left, I forgot my sunglasses, which are $150 things. We came back, having been gone for about a minute. Upstairs, the staff was trying them on. No effort had been made to just lean over the rail and call to us while we were getting ready to leave on our motorbike, even though we were their only customers at the time.

The Sugar Palm sucks on all fronts – quality, quantity, cost, and service.