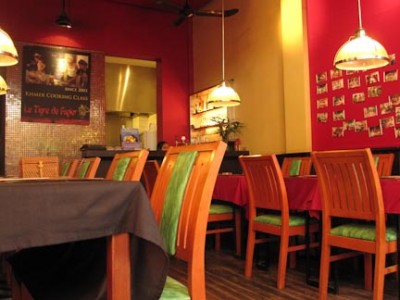 Le Tigre de Papier is located in the mob of other tourist-oriented restaurants, next to the Psar Chaa in the downtown area.

There is a wide range of options on the menu, ranging from Khmer to Thai to Indian.

We ordered two Indian thali plates – vegatarian. It was good in quantity, but not all that good in quality. The nan bread was more like crackers than nan bread, and the poppadoms were stale. We were unimpressed.

On the plus side, they had fifty-cent draft Anchor beer. But so did a lot of other places, so that’s really just keeping pace with the just-feet-away competition.

Also on the plus side, the waitress was nice and had a sarcastic sense of humor, which is hard to achieve in a non-native tongue. She also did some Khmer tutoring.

Not including tip, the cost was US $9 for three beers and two meals that were all we could eat. That’s not bad.

Le Tigre de Papier – based upon one meal – is a mixed bag: not so great a job on the Indian food, but a good price and a nice staff. 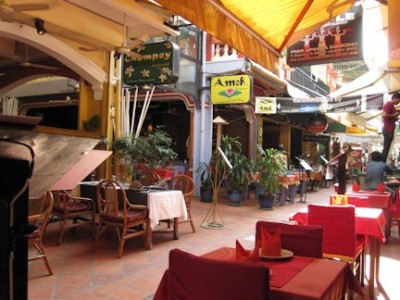