This beer is made by the folks who make Alhambra beer; which, together with Cruzcampa, seems to comprise the bulk of the Spanish beer market.

It has more hops aroma and bitterness than other Spanish beers we’ve tried, including the more-expensive “reserve” beers put out by the major breweries.  Most of these latter type tend to have higher alcohol content than the standard brews; and the makers tend to go too light on the bittering hops, which makes for too sweet a beer.  At least the Alhambra 1925 Reserve avoids that mistake.  You will notice the bitterness (in a good way).

Like all Spanish beers so far, this one lacks the body, hoppiness, and character of a good German or English or Irish or American brew.  It ain’t no Anchor Steam, but it is drinkable, and sits at the top of the Spanish heap…so far.

It rates a “Drink It if There’s Nothing Better in the Fridge.”

By the way, it costs about a Euro per 12-ounce bottle in your neighborhood grocery store. 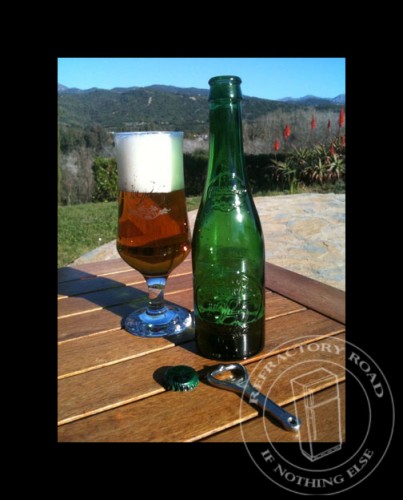