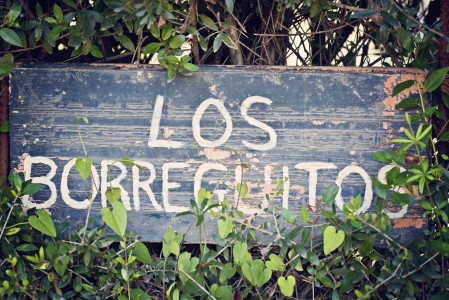 This is a self-catering vacation rental house in Andalusia’s Cadiz province located near a village called San Pablo de Buceite, which is seven kilometers from the town of Jimena de la Frontera.

The house has two bedrooms, one with its own bathroom, and one with private access to a second guest bathroom. Both bathrooms have a shower. The master bathroom also has a tub. The bedrooms are of good size, and have their own heating and air conditioning units.

The kitchen is medium sized, workable, and has a small refrigerator, dishwasher, microwave, oven, and gas cooktop. There is a second, regular-sized refrigerator in the laundry room, which is also equipped with a washing machine. There is no dryer, so clothes must be hung on an outdoor line.

The floorplan is open, with the kitchen, dining table, and living room furniture all in one large, high-ceilinged space. There is an air conditioning and heating unit servicing this space, as well as a small wood burning stove. It’s a comfortable layout. 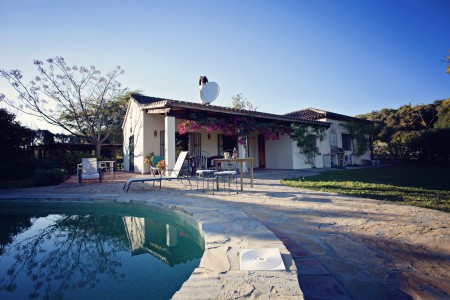 The outdoor area has a small – very small – pool, that is just to the pool side of being a tub. It also has a barbeque built into the back wall of the house. There is a great deal of both covered and uncovered patio area, with a large amount of outdoor furniture. The backyard has a great view of mountains and orange groves.

The surrounding area is rural and quiet. The nearest neighbors are out of sight. The road servicing the house and the neighbors is a narrow dirt tract, hidden from view by a metal gate, and used very little. The total effect is privacy and serenity.

For entertainment, there is the pool and barbecue, of course. There is also a satellite television, a DVD player, and a very reliable and very fast Internet connection with wireless router.

To stay at this house, you must have a car, unless you like walking and walking just to get to and from the small village of San Pablo. Not that San Pablo isn’t a great little place. It has a handful of restaurants, some small bars, a bakery, and a small grocery store. But without a car, you will be challenged getting to the other places that surround the house.

Places like Ronda, Gaucin, Jimena, and Castellar de la Frontera. These all are within an hour’s drive. Farther afield are places like Malaga, Tarifa and its ferries to Morocco, Marbella, and Granada. The house is a great place from which to venture out for the day, and then return to privacy and serenity. But you need a car.

You also need a car to hit the larger food shopping options in Algeciras, and to stock up on firewood at Jimena.

The only two negatives we noted about the house are lack of a decent stereo system (there’s a little thing that hardly counts as a stereo, and wasn’t working with CDs when we were there), and the build up of moisture and condensation in the bathrooms and bedrooms during the winter. This last item caused a constant battle with mildew, which kept appearing on walls and in the showers.   It’s probably an unavoidable problem with concrete construction during cold periods, unless the owner’s acquired a dehumidifier, which would be a good idea during the winter.

The price of rental was good. We paid US $1251 for thirty five days, which did not include electricity. Our electricity bill came to US $270. So, the total per day rate for the house came to US $43. Of course, this was the winter and the off-season, so rates are different – meaning higher – for other times of the year.

Overall, we were very pleased with Los Borreguitos, and recommend it to anyone traveling to this part of Spain.

The house can be rented via the HomeAway website at holiday-rentals.co.uk.  It is listing number 3696.