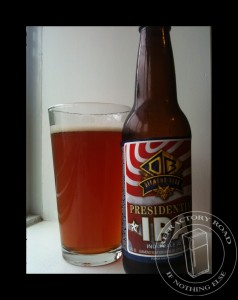 This IPA is made by the Diamond Bear Brewing Company of Little Rock, Arkansas.

If we had found this bear in anywhere but the United States…or England…or Germany…or Ireland, we would have different things to say about it.  If we had found it in Thailand…or Laos…or Cambodia…or Spain, we would have bought cases of it on the spot.  But, it’s all about context; and in the microbrew world that has erupted in the States, the bar has been raised significantly.

This is not exactly what I would call an India Pale Ale.  IPAs are supposed to be heavily bittered, but this brew is more malty and less bitter.  It’s still good, but closer to being a pale ale than it is to being an “India” pale ale.

If you are handed a bottle of this beer, well just drink and enjoy.  You will.  But go to the store with the intent of purchasing it, and only it?  Not so much, when there are other, better options now in the US market.

So, while we were torn over the rating, we are going to give this beer a “Drink it if There’s Nothing Else in the Fridge” (unless you are in Thailand…or Laos…or Cambodia…or Spain; in which case you had better buy it by the case).