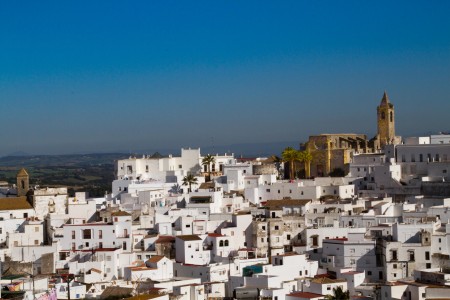 Casa Santiago is a self-catered vacation rental inside the town of Vejer.

It’s an attached, two story, three bedroom, one-and-a-half bath apartment; in the middle of a row of other attached, two-story apartments that line a narrow lane, like pretty much all the housing arrangements inside small Spanish towns.

Casa Santiago has the kitchen, dining area, a half bathroom, and a small bedroom on the first floor; with a small wood burning stove in the dining area. Two bedrooms, a living area, and a bathroom with shower are on the second floor.

There is a shower — just a shower, not a sink or toilet — in one of the upstairs bedrooms, which struck us as a strange use of what was likely once closet space. It must have been someone’s idea for decreasing competition in the one full bathroom. A toilet and sink would be more useful, as how often have you awakened in the middle of the night wanting to take a shower, and wishing you didn’t have to stumble out of your room to do it?

The living room has your standard television and DVD player arrangement, although the DVD player didn’t work properly during our stay.

Like pretty much all properties in town, there is a rooftop patio area. It has a nice view and some patio furniture. In the summer, it would be a great place to drink a beer and catch some sun; but this was winter, and it was cold, windy, and often drizzling rain.

The apartment is located pretty much in the center of town, placing everything in Vejer within a few minutes’ walk. But then Vejer is a pretty small town, so nothing is far away, no matter where you are.

I reckon that Casa Santiago sounds OK to you, so far. That’s certainly what you would think reading the reviews and looking at the photographs on the web site where it’s advertised. Folks really rave about it. We think they are wrong, or at least overstating the case.

Our first issue with Casa Santiago is the divergence between reality and photographs. It just looks bigger in the posted pictures than it is in reality. The spaces are small, and we felt closed in. Of course, expansive accommodations in the middle of a Spanish village are hard to come by, but the pictures created an expectation that was not met upon arrival.

Next was the lack of internet. The advertising says that the apartment has broadband internet. That is flatly false, as the apartment itself has no internet access of its own…at all. To get internet access, you must first purchase a wireless account from a provider whose office is a couple blocks away. Next, you must go to the roof of the apartment and log on to the wireless service, as the roof is the only place you have a hope in hell of getting a signal. Then, you must struggle through weak signals, frequent drops, and puny-assed bandwidth. And, if it’s the winter, you get to freeze your butt off in the process. That is not what I call having broadband internet access as a feature of the rental; and since having internet access was a basic criteria by which we chose an apartment to rent, we were not happy.

Thanks to the wiring, the multiple heaters became somewhat useless, as we couldn’t run more than a couple at a time. The apartment was always cold. As to cooking…well, we got used to cooking on a single burner, in the dark, using a flashlight, with our coats on.

We could have gotten over the smaller-than-expected size of Casa Santiago, but the lack of internet access made it unusable for people needing to conduct business, and the electrical challenges were ridiculous.

“So,” you ask, “what about the great reviews on the web site.” Take a harder look at them, and what you notice is that most of the commentary is really about how much visitors enjoyed Vejer and the surrounding area, not about the details of the apartment itself. Since they enjoyed Vejer, they gave the house a high rating.

We reserved Casa Santiago through the HomeAway.co.uk website at www.holiday-rentals.co.uk. It is property number 457210. It cost us US $60 per night, at the off-season rate.