A one-year trip through multiple countries — many of them third-world — takes a well-conceived medical plan.  Our plan consisted of a medical kit, pre-trip vaccinations, and medical insurance. 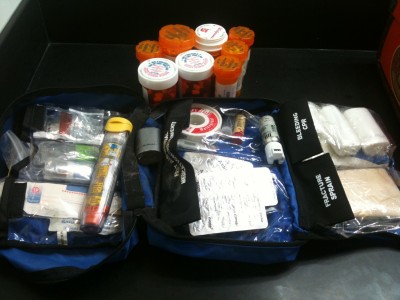 We used an Adventure Medical Kits “Fundamentals” pre-made kit as the starting point.  I don’t think we’d do that again, as much of what was in the kit was ditched before we even started, much of what we actually took went unused, and much of what we needed was either not part of the store-bought kit or in too small a supply.  Knowing what we know now, we would build a kit of our own, from scratch.

Here is a listing of materials that we actually used and would include in a future kit.  I’ll address medications later.

A collection of band-aids of various sizes
Moleskin
Two Ace-type elastic bandages, a large and a small one
A lace-up type ankle brace
A reusable and microwaveable hot/cold pad
A thermometer
A pair of scissors
A pair of tweezers
A pair of nail Clippers

Not much, is it?  I still might throw in a couple large pressure bandages for good measure, but we thankfully never used any.

Well, on to the medications.  There are several.  In addition to the basic stuff for minor wounds and traveler’s diarrhea, we needed things to deal with Jen’s asthma and allergies.  Also — and listen up, guys — women traveler’s have unique concerns, like yeast infections and urinary tract infections.  You need to take stuff to deal with these issues, because the last thing anyone needs is a yeast infection days or weeks away from a no-kidding pharmacy.

Some of what we used was acquired or resupplied on the road — things like cetrizine, Actifed equivalents, eye drops, tylenol, benadryl, and ibuprofen.  This is not difficult in Southeast Asia, where no pharmacist ever requested a prescription.  We just looked up the active ingredient and generic names for a drug, via the internet; and took this information to a pharmacy to get what we needed.  If they had it, they sold it to us.  Australian pharmacists, on the other hand, treated a ibuprofen purchase like we were trying to get morphine (a little overstatement here, but it was more challenging than just laying it on the counter).

In case of questioning when entering a country, we carried the prescription drugs in their original bottles; and we carried a print-out of our prescriptions, obtained from our doctor.  However, we were never asked about the drugs we carried.

I think we received every available travel vaccination, as that was the cumulative effect of the CDC recommendations for the countries on our hit list.  Here’s what we got…

We also had PPD tests done for tuberculosis before leaving, as a baseline for testing upon returning to the States.

We carried our yellow International Certificates of Vaccination or Prophylaxis with us, although we were never asked to show them.

Because I am retired from the US military, both of us have worldwide medical insurance, as well as access to US military medical facilities across the globe.  So, insurance itself wasn’t much of a challenge for us, although any costs had to be paid out-of-pocket and then submitted for reimbursement.

The gap in our insurance was medical evacuation coverage.  We needed a way to get ourselves to first-world care if we were seriously injured or became seriously ill in a third-world destination.  For that, we purchased a one-year family membership with On Call International, for a cost of $800.  We never had to use it, so we can’t vouch for the service.  We chose it based upon reviews, the level of coverage, how it dealt with pre-existing conditions, how it dealt with high-risk activities like SCUBA diving, and the latitude it gave us for choosing an evacuation destination.