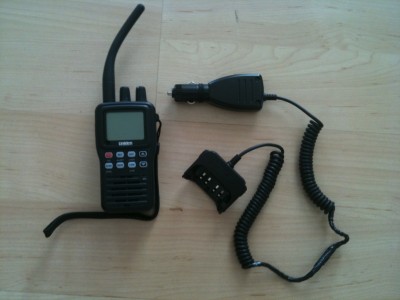 The Uniden MHS75 does what it is advertised to do.  It communicates effectively on VHF channels.  It is waterproof.

We used the radio on a three-week kayak trip through the Bahamas’ Exuma Cays.  It was stored in a non-waterproof bag inside the kayak, and was soaked-to-moist the entire time.  When we turned it on, it came on.  It did not appear to loose battery charge while it was turned off.  Once, while we were weathering Hurricane Isaaac, we had a crystal-clear conversation with a boat anchored 8 nautical miles from us.  So far, so good.  Right?

But there is a problem with this radio — at least there is a problem for kayakers and others who rely on solar power.  The problem is that the radio cannot be charged with other than its proprietary DC charger, and that charger will only work with DC cigarette lighter-type connections to a car or a boat.

I tried charging the battery from a Brunton 26 watt solar panel.  No luck.

I tried charging the battery from a Brunton Sustain power pack.  No luck.

I tried charging the battery from an Ansmann Digicharger Universal Charger.  No luck.

I even dissected the proprietary charger in an attempt to work around whatever “special” thing the battery wanted.  No luck.  (In the photo, you might be able to see the electrical tape bandage for the wound I inflicted.)

I contacted the manufacturer.  They pointed me to an AC adapter I could purchase, but when it came to DC charging they waved me off with talk of liability issues.

So, the Uniden MHS75 radio is a device that works well as long as it is charged through a proprietary charger that only works with DC cigarette-style outlets on boats and vehicles.  If you fall outside this description, you are f**cked.  Too bad such a decent radio is so ill-served by its charger and the manufacturer who made it.