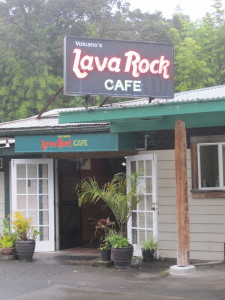 Lava Rock Cafe is located in the town of Volcano, near the entrance to the Hawaii Volcanoes National Park, on the Big Island of Hawaii.

We have been to this cafe twice over the years, and ordered their only vegan-friendly option on both occasions: a garden burger.  It is a poor thing with a cheap, white bun; a reheated patty that is the same frozen thing you can buy in most grocery stores; and fries that also look store-bought and once-frozen.  On a scale of 1 to 10, with 10 being the best, the burger rates a 3.  You would likely be embarrassed serving it at home.

The problem with Lava Rock Cafe may be that it is a much-used lunch stop for tour buses.  A restaurant that draws the majority of its business from tourists has little incentive to produce quality food, particularly when busloads of hungry tourists are dropped right at its doorstep.  Why make the effort to create a clientele of repeat customers, when you cater to people who will never pass your way again?   We think this calculation is behind the shortage of good restaurants at tourist destinations.

When it comes to Lava Rock Cafe, we recommend you seek lunch elsewhere.