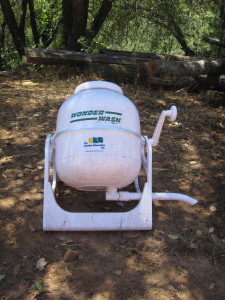 We bought one of these for truck camping, thinking that if it worked, it would beat washing things by hand.

This is the hand-cranked clothes washer that was once pushed heavily in television adds. You simply add water and some detergent to the clothes, turn the drum a few times, and the dirt is flushed from the laundry — that is the claim.  But we found the reality to be a bit different.

Over the course of a month, we  washed multiple loads of clothing and towels, with varying degrees of soiling.  We consistently found that it took longer to wash and properly rinse the loads with the Wonder Wash than it did to use a plain, old bucket and hands.  We also found that hand washing consistently delivered cleaner laundry.  Even after washing with detergent; and many, many rinses; clothes frequently emerged from the Wonder Wash with significant and noticeable dirt.  In terms of time, effort, and results; the Wonder Wash was simply non-competitive.

We had hoped the Wonder Wash would live up to its claims, but it did not.