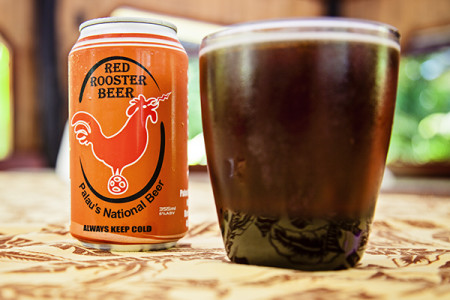 Palau has a brewery. It produces a beer called Red Rooster, which comes in three forms, as far as we can tell: Amber, Light, and Wheat.

The Amber combines the watery weakness of Budweiser with the excessive sweetness of many under-hopped, and therefore unbalanced, commercial attempts at a dark beer.  It is not good, and should only be drunk if you are desperate.

The Light variant is akin to Old Milwaukee or Milwaukee’s Best — liquid shit in a can.  Like the Amber, the Light should only be drunk if you find yourself stranded on an island that has nothing else to offer, not even stagnant pools of water.

The Wheat we tried in draft form, with a slice of lemon. Given the nature of its siblings, we were surprised to find the Wheat to be pleasantly drinkable.  Maybe it isn’t a gold-medal-winning craft beer; but given that the other options on Palau are pretty-much confined to Budweiser, Asahi, Corona, Heineken, and similar crap;  it’s about as close as you are going to come to a respectable beer in these parts.  Unfortunately, it is not one of the staples in the majority of stores, and we only encountered it in the Taj Indian restaurant in Koror.

Palau is just not a beer destination.  Drink rum.