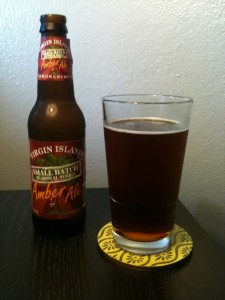 This is beer is labeled as a “Small Batch Seasonal Series,” brewed by St. John Brewers of St. John Island in the U.S. Virgin Islands.

When first poured, it was obviously flat.  Lack of carbonation is a trend I have noticed with beers from this brewer.  I am frankly surprised this beer made it out of the brewery and onto the shelf.  Whenever I have brewed a beer of my own that was this flat, I considered it a failure.  Where is the quality control?

My first quaff had an initial, balanced flavor in-line with an amber ale; but then the flavor was lost.  Within seconds, it was like drinking a mildly-flavored water.

The bottle says that the alcohol content is 5.5%.  I doubt this.  The lack of body argues against enough malt in the wort to have the potential for this percentage, and I felt no impact at all from alcohol as I finished it.  I would like to see the specific gravity readings that equate to 5.5%.

A lighter beer with flavor and body is a good idea for the Caribbean, but this is not a beer that realizes the idea.  It is, as I said, a mildly-flavored, lightly-alcoholic, still-water brew.  Corona has more character.

We give this beer a rating of “Pour it Down the Sink”.