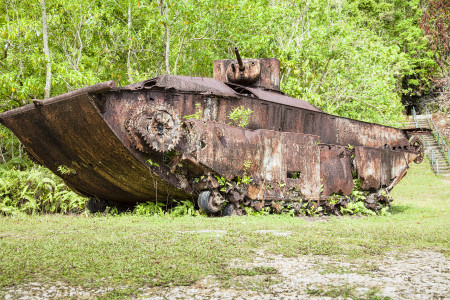 We spent four nights and three full days on Peleliu.

Dan’s draw to Peleliu was the battle fought there during the Second World War. Dan is a retired Marine, and the battle to take the island from the Japanese was primarily a Marine fight.

The fight for Peleliu was one of the most savage of the war, with the highest casualty rate sustained by a Marine landing force, and all but 19 Japanese defenders killed. In total, 13,000 men died, and another 8,500 were wounded, fighting for this five-square-mile piece of land.

Today, Peleliu is reputed to be one of the best-preserved Pacific battlefields.

On Peleliu, we stayed at the Dolphin Bay Resort. The hotel arranged our transportation from Koror, using a Koror-based diving operation. We were extra passengers on the boat, which carried a dozen older Japanese to a one-day tour of the battlefield. The boat departed in the morning, heading around the German Lighthouse, and east of the islands between Koror and Peleliu.

And here Dan was, a retired Marine, sharing a boat with the likely decedents of Japanese soldiers, and headed toward a small bit of land where thousands of Marines and Japanese once slaughtered each other.

An hour later, we arrived at the dock on the north end of Peleliu. A representative from our hotel was present to greet the boat and take the Japanese passengers on their tour. He told us our shuttle was on the way.

We people-watched while we waited. Several locals, of various ages, were sitting on benches near the dock. They were all smiling and friendly.

Our shuttle driver was Filipino. He told us that approximately 600 people live on Peleliu, of which 30 are Filipino and 20 are Bangladeshi. Like Koror and Babeldaob, there are many non-Palauans employed in tourism and agriculture.

Peleliu is small, and our driver took us to the hotel in minutes (you can read our review of the hotel here).

Over the next three days, we bicycled around the island, primarily touring artifacts of the battle. You can easily pedal around the island’s perimeter in a single day, stopping at sights along the way.

Peleliu is hot and humid. Any travel requires several liters of water.

There is little-to-no traffic on Peleliu. If you see two vehicles together, it’s a traffic jam. The roads are pot-holed and uneven in many places.

During our stay, we found five stores on the island. One was a tiny store in a small, white building at Pelelieu’s northern boat dock. It had a handwritten, cardboard sign taped to its door that read, “Store.” The other four were just south of the road junction where the Peleliu state legislature building is located, on the north-south road that parallels the coast. None of the stores had much more than water, beer, and snacks. 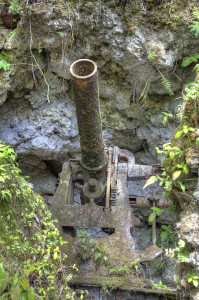 During the Second World War battle, the entirety of Peleliu was a battlefield. Artifacts can be found throughout the island.

The US 1st Marine Division landed across two color-coded beaches on Peleliu’s southwestern shore. The 1st Marine Regiment used the northern White Beach. It is shockingly small for landing an infantry regiment of 3,200 men.

And that is the thing that most struck us about Peleliu from a combat perspective: everything is small and intimate, to a degree that cannot be appreciated by reading or map study. 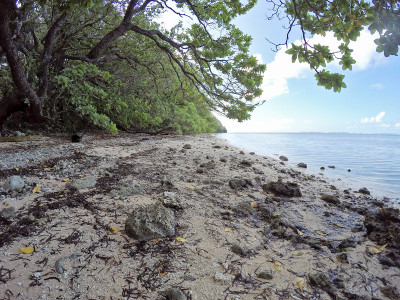 White Beach has a small jut of land that defines its northern extremity, which came to be known as “The Point.” On the day of the landing, Company K of 3rd Battalion, 1st Marine Regiment seized this piece of coral. During that first day’s fighting, the company was reduced from 235 Marines to just 18. Over the next two nights, the remaining Marines held “The Point” against several counterattacks, killing some 500 Japanese soldiers in the process. We found the remains of a concrete Japanese bunker, oriented to deliver fire down the length of White Beach. 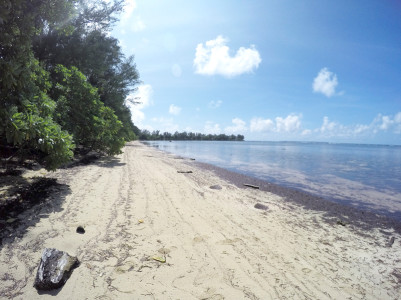 South of White Beach is Orange Beach. This was where the 5th and 7th Marine Regiments landed. Like White Beach, it is small, as is the distance from it to the Japanese airfield that was the primary American objective of the battle.

There is a barrier reef just offshore of the two landing beaches. Standing on the beaches and looking seaward, you are struck by its closeness, at less than a rifle-shot away. Yet here was a formidable obstacle during the fight, where Japanese defenders slathered mortar fire, while Marines heading into the fight were transferred from landing craft to amphibious tractors for delivery to the beaches, and wounded Marines were transferred back for delivery to surgical wards aboard ships.

We stopped for a time at White Beach, “The Point,” and Orange Beach. Dan collected sand at each, which he later gave to Marines currently serving in the battalions that fought on Peleliu. 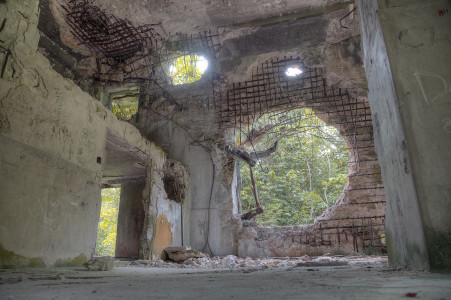 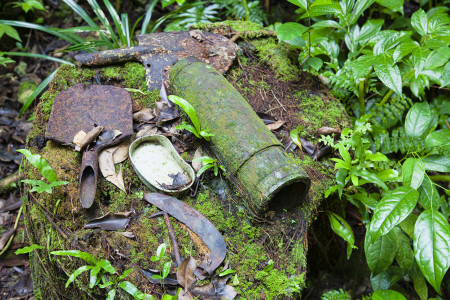 We also explored a bit of Umurbrogol Mountain. Umurbrogal is the maze of narrow coral valleys and ridges that defined the battle for Peleliu. It is honey-combed with natural and man-made caves and tunnels, which the Japanese defenders turned into an inter-locking network of defensive positions. To this day, many of the Japanese defensive positions remain intact. Weapons, ammunition, and human remains can still be found in them; and the detritus of war — shell casings, rusted rifle barrels, holed helmets, artillery shrapnel — is strewn across the landscape. Mines and booby-traps emplaced by Japanese defenders still litter the area. 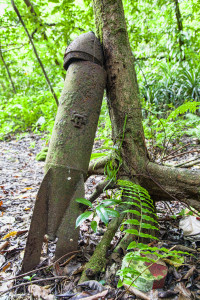 There is a marked trail that leads into parts of Umurbrogol Mountain, cleared by a de-mining organization. We walked this trail, through a terrain corridor the Americans nicknamed “Death Valley.” The valley is 100 meters or less in width at any given point, with 30-to-60 foot vertical walls, making it more like a narrow hallway than a valley. At places, its floor is sunken tens of feet. Even today, you can stop anywhere in “Death Valley,” look through seven decades of jungle growth, and spot multiple Japanese positions opposing you at close range.

It was hot and humid everywhere we went on Peleliu, and it was noticeably worse in Umurbrogol. Personal accounts of the battle frequently mention the oppressive heat and humidity, and the Marine Corps’ official history indicates above-average temperatures during the battle. Combat photographs of Peleliu often show Marines fighting with their shirts fully unbuttoned, or wearing no shirt at all, which is indicative of the weather’s severity. There is even a photograph of Chesty Puller, the iconic commander of the 1st Marine Regiment, bare-chested in his command post — almost unthinkable in the strict-standards culture of the Marine Corps.

There is a battlefield museum, located a short distance inland of White Beach, and housed in a Japanese fuel storage building that was used as a defensive position during the battle. The museum is rudimentary, consisting of photographs, newspapers, books on the battle, and artifacts collected from the island. None of it would pass the archival standards of a US museum, which is disappointing given the sacrifices made on both sides. Peleliu has been called “The Forgotten Battle,” and the state of the museum speaks to the truth of it.

One of the items in the museum is a photograph album donated by a Marine veteran. It is poorly preserved, and will not long survive. The album is notable for its photographs of Japanese battlefield dead. Underneath each is the handwritten caption, “Good Japs.” This is a reminder of the visceral hatred that characterized the Pacific war, and was evident in many of Dan’s discussions with Marines who fought against the Japanese.

And these are the “why’s” of the ferocity and cost of Pelelieu: difficult and compartmentalized terrain, a complex network of mutually-supporting defensive positions, close engagement ranges, thousands of men concentrated into small spaces, extreme heat and humidity, and neither side asking or giving quarter.

Getting Back to Koror

For our return to Koror, we took the daily shuttle boat used by the locals. The boat was clean and modern, and left on-time at 7:30 in the morning.

People continued to board the boat until the second of departure. All the while, everyone was exceptionally nice to each other, chatting and laughing, and lending help to those who needed it. It reminded us of bus rides in rural Laos.

The following is a list of books and reference materials we used during our trip to Peleliu.

Personal accounts of the battle:

With the Old Breed: At Peleliu and Okinawa, by E.B. Sledge.

Helmet for My Pillow, by Robert Leckie.

Coral Comes High, by George P. Hunt.  This book is written by the Commander of Company K, 3rd Battalion, 1st Marine Regiment, and describes the fight for “The Point.”

Narrative histories of the battle:

Brotherhood of Heroes: The Marines at Peleliu, 1944, by Bill Sloan.

Bloody Beaches: The Marines at Peleliu, by Gordon D. Gayle.

WWII Battlefield Survey of Peleliu Island, by Rick Knecht, Neil Price, and Gavin Lindsey of the Department of Archeology, University of Aberdeen.  This is a report of a survey conducted in 2012, under a grant from the National Parks Service’s American Battlefield Protection Program.  You can find free .pdf downloads of the report on the internet.  The report is finding and identifying artifacts from the battle.

History of U. S. Marine Corps Operations in World War II, Volume IV: Western Pacific Operations.  This contains the official Marine History of the battle.  You can find free .pdf downloads on the internet. 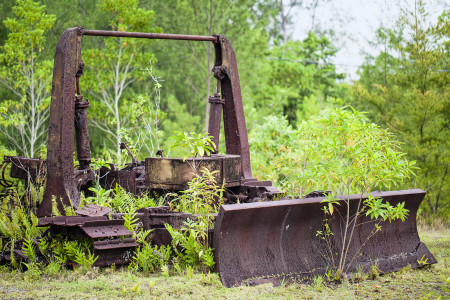 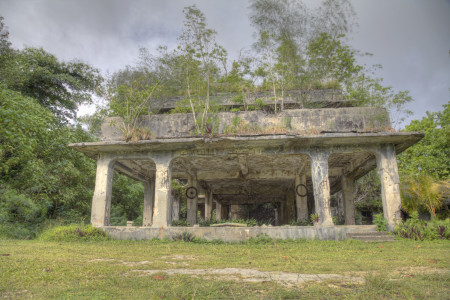 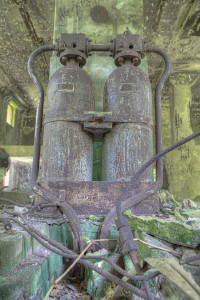 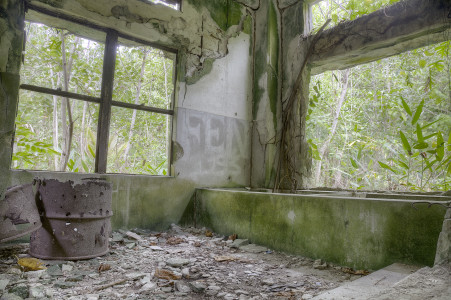 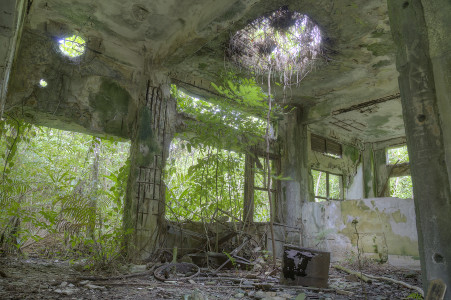 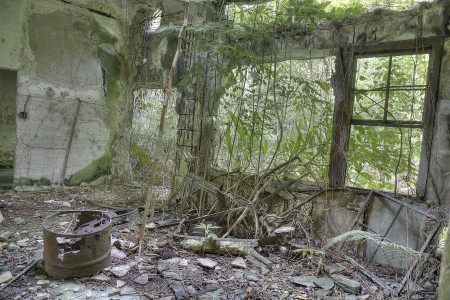 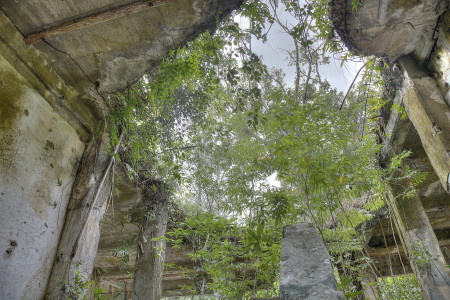 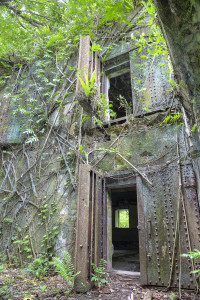 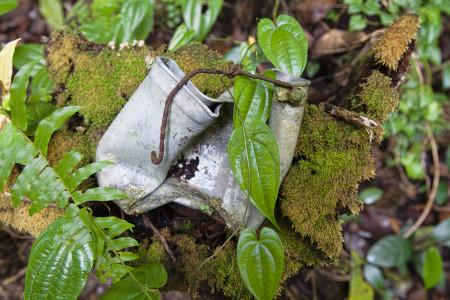 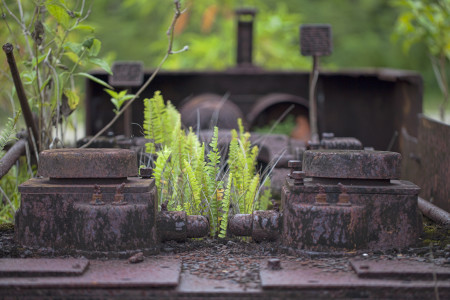 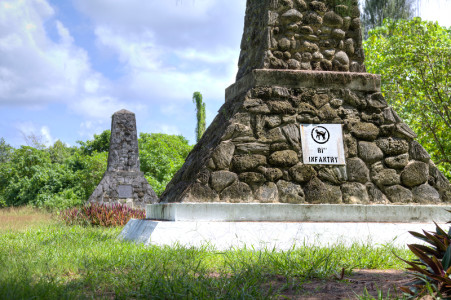 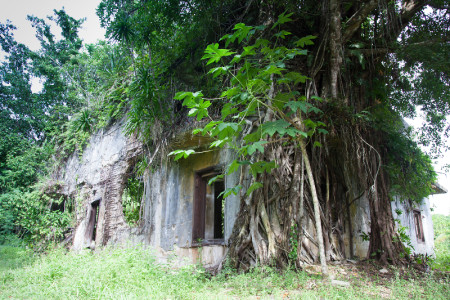 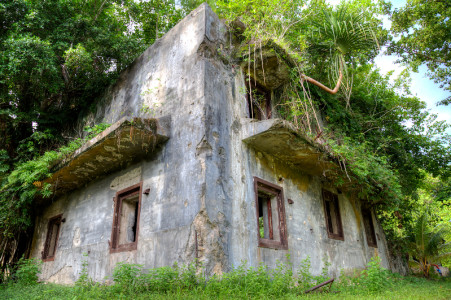 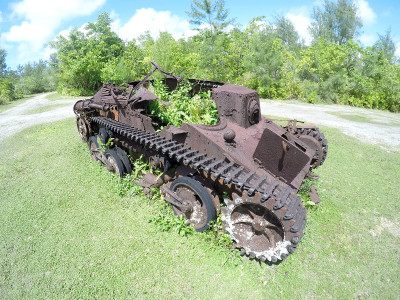 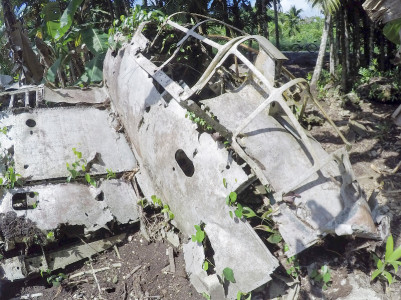 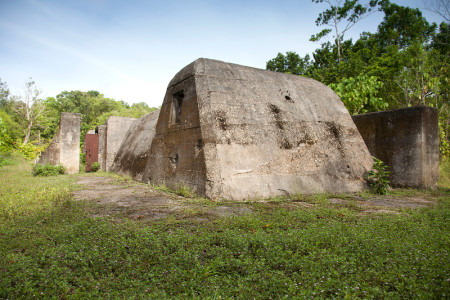