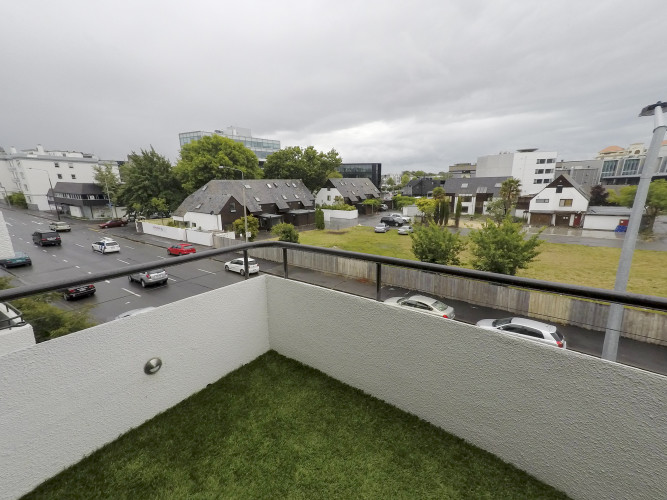 We booked this hotel for two nights at the end of our one-month hiking and camping trip to New Zealand, thinking it would be a nice reward for our hard work. The hotel has a five-star rating, and its reviews on various web sites are superb. It is located on the east side of Hagley Park, near the city center, which is the prime spot as far as we can tell. Everything sounded great.

As with most things, the reality was not quite as good as the advertisement.

Our room was a third-floor, junior suite. It was large, modern, clean, and fairly new. The larger, open room contained a sleeping area with queen-sized bed and night stands; a living area with sofa and chairs; a dining area with table and chairs; a small kitchenette with sink, microwave, and a small refrigerator; and a television. The bathroom had two sinks, a shower, and a toilet. The room was adjacent to the elevator and its door opened onto a common hallway; but still we heard no noise from the elevator, hallway, or our neighbors.

The rooms have decent-sized balconies with two chairs and a small table. Our room was on the hotel’s east side, so our balcony looked down on Montreal Street. This is very busy, four-lane roadway. Traffic noise permeated into the room.

Our balcony had no cover from the rain that fell throughout our stay. It was wet and uncomfortable. The first and second floor balconies, however, are covered by the balconies above them.

If we were forced to stay here again, we would demand a first or second-floor room on the building’s west side, which looks onto the hotel’s parking lot. The view would be better, there would be less road noise, and the balcony would be covered.

The cleanliness and upkeep of the room has less than we expect of a five-star hotel, or any hotel at this price. Some mold was growing in the bathroom sealant, the dark paint on a wall was chipped in several places, and cob webs decorated the balcony.

We walked a wide radius around the hotel. There are several restaurants and bars, which is good; but the area has the feel of a place you go to, not a place you stay at. The hotel’s location is too busy, too commercial for our tastes. A month earlier, we spent two nights at the Classic Villa, just a 15-minute walk to the south. That was a much more relaxed, quiet, old-town location. A few blocks can make a big difference.

After camping and hiking, we had clothes to clean; but the hotel had no guest laundry. Yes, they will do it for a fee, if you turn it in on-time for a 24-hour return; but that is inconvenient when you have gear to clean and want it done a certain way.

We ate a breakfast and a dinner at the hotel’s restaurant. The quality was good, but the quantity was not. It is one of those places that gives you solid presentation of something good, but leaves you hungry. So, while the price for each dish appeared competitive with other restaurants in Christchurch, a by-weight cost analysis would have shown something less favorable.

We booked our stay at Hotel Montreal through Expedia, getting a per-night rate of NZ $525. It was the most expensive place we stayed in New Zealand. The cost and what we noted about the room prompted us to ask a basic question: What makes for a five-star hotel? Well, a cursory internet search tells us that the “luxury” rating is defined by meaningless, shiny things; like someone turning-down your bed at night and leaving a little chocolate on your pillow. The Hotel Montreal had this, and it had bathrobes and an iPad in the room. These things make it a five-star under industry rating schemes. But what those rating schemes seem to ignore are the substantive things, like view and location and quiet. Adjusted for these factors, the Hotel Montreal would not be a five-star in our rating scheme.

At whatever rating, Hotel Montreal is overpriced by a factor of almost two. There are alternatives costing less than NZ $300 per night that have all the comfort of Hotel Montreal, and few of its annoyances. What are those alternatives? One is the Classic Villa, where we stayed our first two nights in Christchurch.