The Kepler Track is one of New Zealand’s Great Walks. It is a circular, 60-kilometer trail near the town of Te Anau in Fjordland on the South Island. The trail is designed as a four-day trek with huts and campsites along the way, although it is common for aggressive hikers to complete the course in three days or less.

Like all the Great Walks, you must have hut and campsite reservations. This can be done on the Department of Conservation’s website. The physical tickets are collected at the Department’s office in Te Anau.

We hiked the trail in December, starting at the car park near Te Anau. We walked in a counter-clockwise direction, and planned to complete the trail in four days. 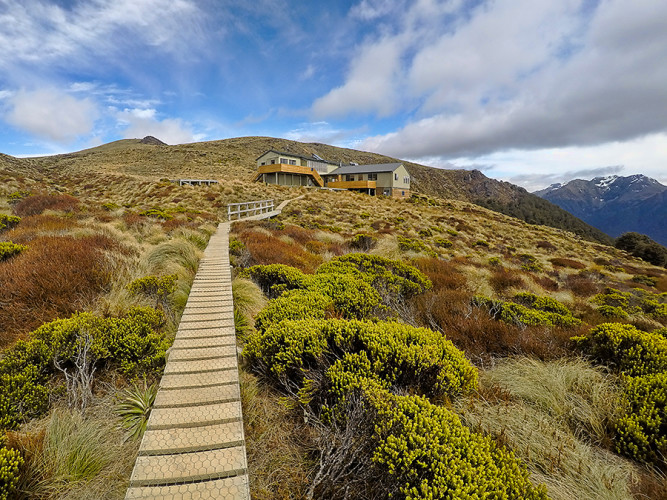 The day started cold, with a blue sky dotted by small, white clouds. By the time we reached Luxmore Hut, the weather had degraded to full overcast with drizzle. We experienced stiff, cold winds in the bald areas of Mount Luxmore’s upper elevations.

This section of the Kepler is 13.8 kilometers, with a net elevation gain of 800 meters (2600 feet). The Department of Conservation’s track guide gives a planning time of 6 hours to complete it; we took 4-1/2 hours.

Most of the trail was well-groomed, particularly in the forested areas of the lower elevations. Some narrow, rocky, muddy sections were encountered in the high, bald areas. The elevation gain is concentrated in half the hiking distance.

Our walk began at 7:00 am, which minimized the number of hikers we encountered on the trail. Of the handful we met, two provided a “small world” moment. They were a young American couple from Brooklyn. When we said our home is Joshua Tree, the man replied that he was there a few days earlier. His band, Moon Hooch, had stayed and practiced in a house just down the road from us.

We were among the first to arrive at Luxmore Hut. The hut is a two-story building with a resident ranger, designed to accommodate 54 hikers. There are two shared sleeping areas, the larger with one-person bunks and the smaller with four-person bunks. Sleeping mats are provided. The open cooking and dining area has tables with benches, multiple stove tops hooked to a common gas source, sinks, and running water. The restroom area has toilets and sinks, and is shared and unisex.

When we made reservations, we were disappointed to find that we had no choice but to stay inside Luxmore Hut (tent camping is prohibited here). We always strive for privacy, and the idea of being stuffed into shared spaces with 52 other people made our skins crawl. But once at the hut, with the weather deteriorating, we were happy to be indoors.

Hikers continued to arrive until dark, filling the hut to capacity. A loud family of 14 claimed much of the cooking and dining area. They had carried fresh ingredients for a multi-course dinner, which was cooked by a man wearing just skin-tight underwear. The smell was murder for those eating relatively-tasteless backpacking meals.

In the evening, the ranger gave a safety and weather brief, answered questions, and collected reservation tickets. The weather forecast called for gale-force winds, rain, and snow the next day. I regretted not packing our merino wool underwear. 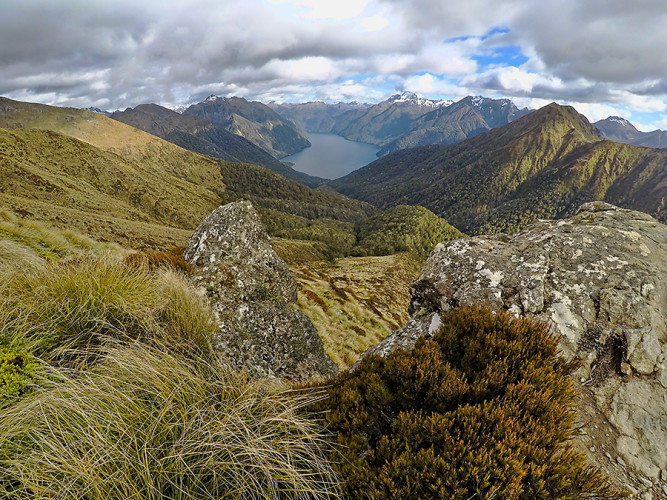 We woke before sunrise and quietly carried our gear past sleeping hikers and into the dining area. A lone woman was asleep on the floor. We made breakfast as others trickled in, packed, and were walking by 7:00 am.

The weather started better than forecasted: cloudy with some patches of blue, less wind than the day before, and no rain or snow. It was cold, but a fleece top and GORE-TEX PacLite jacket were enough to stay warm while walking.

The distance from Luxmore Hut to Iris Burn is 14.6 kilometers, with a net elevation loss of 588 meters (1929 feet). But that doesn’t mean it’s all downhill. There are two climbs while traversing the mountain’s upper elevations, with a cumulative gain of 450 meters (1500 feet). There’s also a good deal of walking on exposed ridge-lines; and a long, steep descent to Iris Burn. The trail was in fairly good condition, with a few ankle-twisting stretches of loose rock, and several manmade staircases just before the big drop. The planning time is 5 to 6 hours; we took 5-3/4 hours.

There are two emergency shelters on this stretch of trail. Several keas (a species of mountain parrot) greeted us at Forest Burn Shelter. The wind was mild then, and there was some sun, so we took a break and ate a snack. The keas crowded around and worked on opening our packs.

When we reached Hanging Valley Shelter, the weather had degraded and light snow was falling. We didn’t stop, instead pushing to reach the descent to Iris Burn and the forest below. The climb down is a series of steep switchbacks. It was hard on our knees, but we were glad to get into the woods and out of the wind.

We were the second set of hikers to reach Iris Burn Hut. We had planned to pitch our tent at the campsite, but the black flies were thick and intolerable. Without a hut ticket, we weren’t allowed to hide indoors. Thankfully, there were open bunk spaces, and we purchased an upgrade from the ranger.

Iris Burn Hut is a one-story building with facilities comparable to Luxmore Hut. It accommodates 50 hikers.

We chose a three-person bunk in the most private area we could find, hoping we’d have it to ourselves. That didn’t work out. We ended-up sharing the bunk with a middle-aged New Zealand man who was hiking with his daughter. They arrived late in the day, when other options were exhausted.

We ate lunch and dinner, drank coffee and broth, and watched a movie on Jen’s iPad while lying in the bunk. When it came time for the ranger’s safety and weather brief, I went to the dining area and handed over our campsite tickets and upgrade money.

By now, the 14-person family had arrived. They took over several multi-person bunks in our sleeping area, continued to talk loudly, and were incapable of walking softly or gently closing a door. Things didn’t settle-down until 10:00 pm, when the ranger killed the lights in the kitchen area. The sounds of snoring, farting, and shifting filled the night. 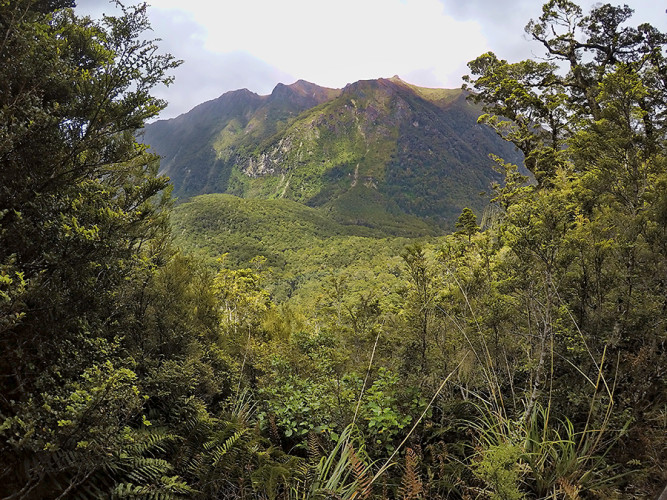 We began walking at 8:00am. The day started cold, and gradually warmed enough that we stripped to shirts and beanie hats for most of the walk.

This day’s walk was about 19 kilometers, with a net elevation loss of 320 meters (1050 feet). There were no challenging climbs or descents. The trail runs through forest and follows the Iris Burn river. It was in very good condition and made for fast walking. The planning time is 5-1/2 to 6-1/2 hours; we took 5-1/2 hours (some of this was spent cooking and eating a second breakfast).

Most hikers end this section of the Kepler at Moturau Hut, which is a Great Walks hut and 16.2 kilometers from Iris Burn. We chose not to do this, instead walking another 3 kilometers to the hut and campsite at Shallow Bay. We had visited Shallow Bay on an earlier day hike, and knew it had good tent sites along the shoreline of Lake Manapouri and no black fly problems.

Shallow Bay has on older, unattended hut designed for 6 people. It was pretty run down and smelled a bit, so we weren’t going to use it unless forced by weather.

We were the first to arrive at Shallow Bay. We set camp, built a fire, and made lunch. I scrounged a pot from the hut and boiled drinking water from the lake. The weather was overcast, but the winds were calm and there was no rain.

Later, two young men arrived and set camp a reasonable distance from us. They were the only hikers to join us.

And now the weather turned. High winds pushed threatening, low clouds. The temperature dropped and light rain fell. We retreated to the tent and watched a movie.

I made more soup for dinner and we ate in the tent. Then we slept. It rained off-and-on throughout the night. 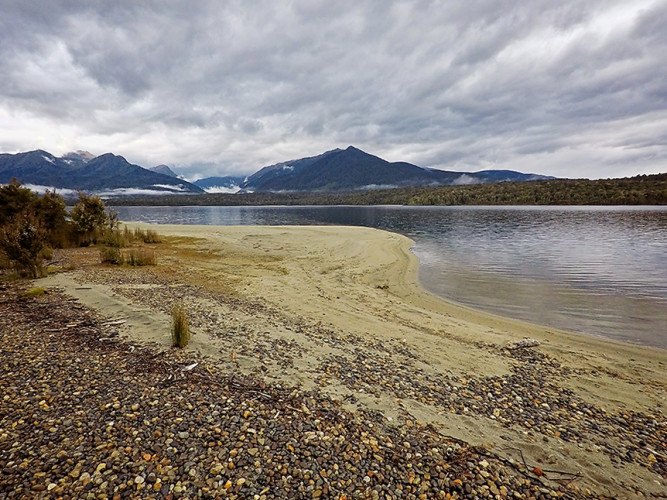 We were out of the tent around 7:00 am and walking by 9:00 am. Our fellow campers were already gone.

It was overcast all day, with sporadic, light rain and moderate wind. The forest provided good protection.

This section of the Kepler is about 15.5 kilometers in length and virtually flat. The trail was superbly groomed and the forest is stunning. It was a fantastic, fast walk. The planning time is 4-5 hours; we took 3-3/4 hours.

After reaching the car park and completing the trail, we went to the Sandfly Restaurant for lunch. Then we checked into our room at Radfords on the Lake, cleaned up, and finished the day with pizza and beer at Ristorante Pizzeria Paradiso.

We took a leisurely four days to complete the track. We were not in peak hiking condition and wanted to limit daily distances to what we could comfortably sustain. That meant many hours spent in huts, playing cards and watching moves. If we had been in better shape, we would have done the track in two or three days.

Plan to stay in Iris Burn Hut, vice pitching a tent at the nearby campsite. The black flies here are intolerable.

You can lighten your backpack by staying in a Great Walks hut each night,. You won’t need a tent, sleeping mat, camp stove, or fuel. The trade-off is privacy.

December is the beginning of New Zealand’s summer. In four days, we encountered rain, snow, freezing temperatures, and strong winds. At times we were wearing everything we had; at others we were wearing just thin shirts and pants. Our equipment included 15-degree Fahrenheit sleeping bags, beanies, gloves, fleece tops, lightweight down jackets, and GORE-TEX PacLite jackets. It was was suitable for the conditions, but we should have also taken merino wool underwear as insurance.

The Department of Conservation’s webpage for the Kepler Track can be found at:

The site has detailed information, maps, a downloadable brochure, and a link to the hut reservation page.