We spent a total of six weeks in Laos, dividing that time between the northern and southern parts of the country.

In northern Laos, we entered the country at Huay Xai, and took the two-day, slow-boat ride down the Mekong River to Luang Prabang. After some time in Luang Prabang, we traveled an easterly circuit by bus and van, stopping in Nong Khiaw, Vieng Thong, and Phonsavan; and threw in a visit to Ngoi Neua by boat. After the circuit, we headed south, stopping in Vang Vieng and Vientiane before exiting into Thailand at Nong Khai.

Our entry into southern Laos was made at the Chong Mek – Vang Tao Friendship Bridge. We made stops on the Bolaven Plateau, at Champasak, and on Don Khon in the 4000 Islands area.

Our impressions of Laos are all over the page, perhaps reflecting the nature of the country itself.

Overlaid on this topography is a miserable transportation network (at least it’s miserable when you get off the standard Luang Prabang – Vang Vieng – Vientiane – Pakse tourist corridor that is Highway 13). Roads off the track are two-lane and smaller, heavily potholed, often mud, and easily disrupted by weather. In the north, public transportation is unpredictable and unreliable. Everywhere, transportation is expensive when compared to neighboring Thailand.

Of course, poor transportation helps impede the spread of tourism, which is not a bad thing for those wanting to avoid the tourist scene. But we found off-the-track transportation to be not just a challenge, but a significant impediment to exploration. Unlike Thailand, where you can get just about anywhere by catching a songthaew ride, in Laos you need your own wheels if you are going to venture out.

As to the Laotian people, the responses we received from them were mixed. In the north, there was little in the way of warm receptions. Reactions to us ranged from silent indifference to grunts and hostile looks. We thought this might be a holdover from the US bombing campaign during the Vietnam War, which is still very much part of living memory. But then we went to southern Laos, to the Bolaven Plateau, which was more heavily bombed than anywhere else in Laos, and here the locals were exceptionally warm and friendly. Whatever the reason – the differences in ethnic groups, the differences in wartime experiences, or the economic and agricultural differences – the Laotian people we encountered were far from uniform in their attitudes toward us.

Perhaps our negative encounters reflected a disdain for tourists. If so, who can blame these Laotians for being less-than-happy about the rapidly expanding tourist trade? In only a few years, the country has gone from no foreign tourism at all, to mobs of Western teenagers doing drugs, holding raves, and walking half-naked through hot-spots like Vang Vieng. For Laotians, it must be a serious love/hate thing: really need and want the money, but don’t like or want the garbage that can go with it. Even to a transient observer, it feels like the growth of tourism in Laos is outpacing whatever efforts are being made to ensure that it complements, rather than damages, the character of the country.

So, why should we be surprised when folks in a small village, in the middle of nowhere, don’t run to greet us when we walk down the street? Maybe they have heard about what happens at Vang Vieng and Don Det, and maybe our being in their town is seen as another step in that direction for them. And maybe, when they were children, they hid in caves to avoid our country’s bombs. And now, here we are, walking through their village, with wealth they can’t hope to have, and the ability to travel just for fun.

Amongst the Laotians themselves, there is wide economic disparity. Housing, sanitation, and educational conditions in the rural villages of the north would be an intolerable national disgrace if found in the States. Meanwhile, in not-too-distant cities, the cost of meals and accommodations is greater than they are in more-developed and more-wealthy Thailand. The vacation homes of wealthy Laotians often sit vacant near bamboo-hut villages that squat in the mud. In the north, farmers toil in rice paddies for pennies, while farmers on southern Laos’ Bolaven Plateau enjoy comparative wealth, thanks to a fortunate combination of climate, geography, and global demand for coffee.

These are all just impressions – more questions than answers. My feelings for Laos are as contradictory as is the country. One thing of which I am certain is that I don’t understand the place, and this makes me want to return and learn some more. 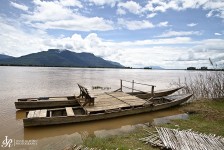 Border Crossing Crossing the Thai-Laos border, from Ubon Ratchathani to Pakse, was a simple affair. The same bus took us the entire distance, letting us off at Chang Mek to depart Thailand at the Thai immigration office, and waiting on the Laos side while we walked to the Laotian immigration office and got our new visas. From there, we were […] 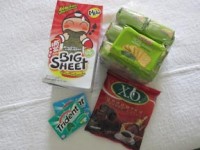 Journey to Vang Vieng Getting to Vang Vieng from Phonsavan proved to be more of a novel than the intended short story; although it started with the promise of being our best minibus ride ever. At 8:30am, our minibus started rolling out of Phonsavan. It was a clean, new twelve-passenger van; with comfortable seats and a driver that actually drove […] 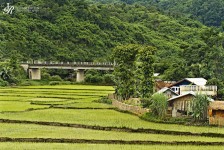 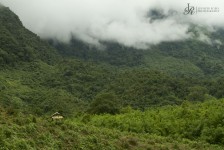 The trip from Luang Prabang to Nong Khiaw started with a van that picked us up from our hotel, already loaded to the gills with other Western tourists and their baggage (mostly backpackers like us). The driver placed our packs on an already over-loaded roof, which should have buckled under the strain, and lightly tied them to other packs in […] 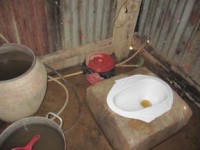 Most Americans have not experienced a squat toilet. When I ran into one for the first time, I have to say that I was a bit afraid. But, being an infantryman in the Marine Corps, I knew a bit about squatting in the middle of the bush to answer nature’s call – so I adapted. I seem to recall reading […]

Into Laos Our crossing into Laos started with a forty-minute pickup-bus ride from the hotel to Chiang Khong, where we had the driver drop us at an ATM for a fill-up on Thai baht (which was maybe not a great idea; see the comments on Laotian currency in the description for that category by clicking here).  Jen also grabbed some […] 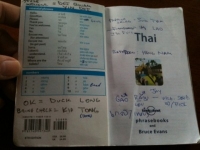 A Tip on Speaking the Language

One observation from trying to learn enough Thai and Laotian to get around… The first thing that people usually learn to say in a new place is the niceties; the equivalents of “hello,” “goodbye,” “excuse me,” “thank you,” and the like.  Based upon the last weeks in Thailand and Laos, I think this is the wrong approach. Locals aren’t that […]