Cambodia is an inexpensive place to visit. For an average daily cost of US $70, we stayed in great accommodations when we could find them, stayed in the best available accommodations when great was not an option, ate at the best restaurants, drank as much as we wanted, and always had a motorbike. All that for just US $70 per day, for the both of us. You would be hard-pressed to live so well, for so little, at just about any other destination.

The Cambodian currency is the riel. The official exchange rate in 2011 fluctuated between 4,000 and 4,100 riel to the US dollar. For simplicity, most people calculate the rate as US $1 = 4000 riel, which is the rate that is used in normal street transactions.

Both US dollars and Cambodian riel were used by everyone, everywhere we went. We frequently paid for things with a combination of dollars and riel (e.g., a $6.50 restaurant tab could be paid with a five-dollar bill and 6000 riel). The US dollar is, for all practical purposes, as much the national currency as is the riel. Nonetheless, we always exchanged dollars for riel, as having the smaller Cambodian bills was often useful.

We used ATMs to get cash. We never had a problem finding an ATM, and they are outside or inside almost every bank we saw. The ATMs spit out money in US dollars — clean and crisp tens, twenties, fifties, and hundreds. To get riel, we then walked into the bank to exchange the dollars. The exchange rate we received in banks was always the current, published rate; not the low end of a buy-sell spread. We were never charged a fee for exchanging currency.

Some ATMs charged a fee for their use, others did not. When we were charged a fee, it was US $1 per withdrawal.

Like most US banks, ours charged us a foreign transaction fee for each cash withdrawal.

Our average hotel cost was US $35 per night. The high cost was US $45 during one of our stays in Battambang. The low cost was US $13 in Kampong Chhnang. These averages include discounted rates we negotiated in Battambang and Siem Reap, based upon extended stays during the low-season.

Even with discounted rates, our average was probably higher than it could have been, given that we could have paid less to get acceptable accommodations in Battambang. There, we used a hotel that we consider one of the best places we have stayed in any country, and we were happy to pay a premium price. Other Westerners we met in Battambang were paying less than half as much at other hotels, and they seemed to be satisfied with their accommodations.

Cost of Meals and Drinks

Our average cost for meals, snacks, and drinks came to US $25 per day for the two of us. This figure includes all the beer and bottled water we consumed, and we consumed plenty of both. The high end was US $45 on one of the days in Battambang. The low end was US $10.25, also on a day in Battambang. There were many, many days where the average cost for two people was in the mid-teens.

On average, the most expensive place to eat and drink was Siem Reap. When this city is subtracted from our calculations, the daily average for meals, snacks, and drinks falls to US $22 a day.

Outside of Siem Reap, we found it easy to get a decent lunch or dinner for under US $10. That covered food, bottled water, and a couple beers for the both of us. Subtract the beer and the cost was usually halved.

We used tuk-tuks a handful of times for short rides between hotels and bus stations. The fee was always US $1 for the both of us.

We rented a motorbike at four of five destinations. The typical cost was US $5 to US $7 per day, although we were charged US $10 per day by our hotel in Kampong Chhnang. Gasoline typically cost US $1.25 a liter, which can carry you a long way on a 125cc motorbike.

We twice rented a private car and driver for transportation between Battambang and Siem Reap. It cost US $35 each way.

Jen was never comfortable with haggling over a couple bucks or a few pennies. She felt it was wrong to do when the difference in price meant nothing to us, but meant a great deal to the people from whom we were buying things.

I, on the other hand, like to haggle. I see it as another opportunity to engage in a conversation with a local, and if it’s all done in good humor it can be a great deal of fun. The locals expect to do some haggling, at least with other Khmers, so I also see it as participation in local custom. I haggled when we purchased items at markets, shops, or roadside stands. I haggled over hotel room prices, particularly when we were staying several nights. I haggled over motorbike rental rates. The things I never haggled over were bus tickets, gasoline, restaurant meals, and beer; as these are generally fixed-price items. 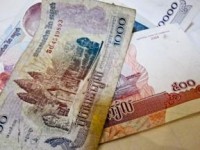