Jen and I have now been in Western Australia for three weeks. During that time, we have stayed in Perth, hiked for twelve days on the Bibbulmun Track, and spent three nights in the rural town of Williams a couple hours south of Perth.

Our plan to hike the entire length of the Bibbulmun Track had to be scrapped. Jen sprained her ankle during our last days in SE Asia. We thought she had recovered enough to start hiking, but after twelve days on the trail it was painfully obvious that she was still a good ways from healed.

So, our new plan is to travel the country as far as Darwin, using a campervan that we have rented for a month. For reasons discussed below, we were seriously tempted to just leave Australia, but we have decided to give the place another chance to show us some goodness.

Here are some observations and thoughts on what we have done so far.

The Cost of Australia

Australia is the most stupidly expensive place I have been on the planet.

$4 for a small cup of bad, black coffee is the norm…and that’s without refills.

$190 for a “budget” hotel room is a good deal in Perth. When we tried to book a hotel in the city after returning from the Bibbulmun Track, the least expensive available rooms we could find started at $500 a night.

In the tiny rural town of Williams, we spent $50 a night (discounted from a standard $65 rate) to stay in a poorly-maintained worksite trailer with six tiny rooms and a shared bath.

A breakfast of two eggs on a slab of bread runs $8 or more. We have been given menus listing two pieces of toast with some jam for $3.50.

Good luck getting dinner for two for under $60. In one popular Perth restaurant, we had three pints of beer, a crappy risotto and mushroom dish, and a stack of grilled vegetables for a cost of $82 Australian dollars – that’s about $86 US dollars, before the tip.

Transportation is also expensive. Two bus tickets to go a couple hours down the road cost us $47.50. For a conversion van rental to go car camping, the company wanted a $7,500 security deposit (I could almost buy the damned thing in the States for that amount).

And Internet? Well, when you can get it, it ain’t free. The Community Center in a rural town charged $6 per hour, and a hotel charged $25 a day. By the way, the Internet seems like a new kinda thing here, like it’s still 1990.

It is very, very easy to spend $400 a day without doing anything more than eating two small meals, drinking a couple beers, breathing air, and sleeping.

The above prices are in Australian dollars, which are worth about US $1.07 right now. So it’s even a bit more expensive than I have stated.

Another anecdote…Jen bought a new lens for her camera. It cost her half as much to buy it from a company in New York, and have it two-day shipped to Australia, than it would have cost her to buy it at a store in Perth.

We have run into more than one once-was-a-tourist with the same story: ran outta money, so had to get a job. I don’t think Jen and I will end up in that situation, but I often do feel violated, and in need of counseling and a shower.

In general, you can expect things in Australia to cost you two to four times as much as they would in the States.

That might be justifiable if you got something in return for your money, but what we have gotten so far is poor-to-marginal accommodations, crappy food, and bad beer. Meanwhile, we have found nothing particularly remarkable or interesting about Australia to recommend it over other places that cost much, much less (the United States included).

So, why is it so expensive? I have no idea, although a quick Internet search revealed that the average Australian income is 150% that of the average US income, after adjusting for the current exchange rate.

We are giving Australia a bit longer to prove it’s worth the cost, but we are seriously tempted to just cut our losses and go somewhere that’s twice the fun for a quarter the price.

The number one observation, of course, is that Perth is extremely expensive. Other observations…

Perth is cold and wet. Folks tell us it gets hot in a couple months, but right now – in September – it’s a long ways from hot.

The younger folks dress a in a lot of black, and a lot of grunge-type styles. Throw in the cold and wet weather, and it would be easy to believe we are in Portland, Oregon – except that Portland is much, much less expensive.

Portland is also much, much more vegan and vegetarian friendly than Perth. When we tell a Perth waiter or waitress that we are looking for vegetarian options, we get a smile that says, “Good luck with that.”

And what food we do get is pretty unremarkable. We have had two pizzas at two different places – vegetarian pizzas being about the only thing we can find that isn’t covered in meat – and I am still trying to figure out how someone can produce a pizza that is completely tasteless. The best thing we have had so far is vegetarian hamburgers, which isn’t a great commentary on Perth as a culinary destination.

Perth drivers are impatient, and like to honk their horns to tell you about it. We have seen a good number of modern variants of the El Camino. In the States, they died in the 70’s…and for good reason.

Second in angst to the beer prices, you can’t watch episodes of Jon Stewart, Colbert, or South Park on the shows’ web sites from Perth, or Australia in general. That’s pretty f**cked.

A typical conversation with a Perth citizen starts with them asking where we are from, us saying the United States, and them then asking why we came to Perth. Given the weather, cost of beer, and inability to watch Jon Stewart, it’s a reasonable question.

You can’t get much of anything done in Perth on a Sunday. Everything is pretty much shut down, except in the central business district, where some shops open for a few hours in the afternoon. Getting food for the Bibbulmun Trail on a Sunday was a major undertaking.

Of all the places I have been – Costa Rica, Italy, Germany, Mexico, Thailand, Laos, Cambodia, and even combat in rural Iraq – Perth and its surrounding area is the only place that has made me wish I had never came.

It’s just that Perth is too close to being the United States to make it unique, and too expensive to make it palatable.

I am going to write a more detailed piece on our time on the trail, but here’s a thumbnail sketch…

The trail system is about 600 miles in length, extending from Kalamunda in the north to Albany in the south.

The trail is divided into 58 segments. Between each segment is a campsite with shelter, water cistern, and tent sites. We hiked twelve segments, from Kalamunda to the North Bannister roadhouse.

Nine of twelve days saw clear skies, with nights in the upper 30’s, and days approaching 70 degrees. The nights were too cold for our 45-degree bags, and significantly colder than planning information for the hike had indicated.

One of the other three days was overcast but dry. The last two days rained heavily.

Most of the trail segments have a good deal of cross-compartment movement, with alternating ascents and descents of 300 to 1000 feet. The most significant peak was Mount Cooke, with a steep 1000-foot climb.

The climate and terrain was dry – when it wasn’t raining. The vegetation consisted of wandoo trees (a type of eucalyptus tree) intermixed with a low (up to 6′) plant that looks a ball of three-foot pine needles in top of a palm tree trunk. The trunks of almost all the trees are black from past fires.

Between the campsite water cisterns and frequent streams, water was easy to come by (thanks to our portable water filter). Food was more problematic, as the first resupply point after Kalamunda is Dwellingup, which is 16 segments down the trail. So, we started the hike with a heavy food load in the packs, and ate less than we would have liked given the calories expended. After Dwellingup, the time and distance between resupply points is significantly less.

The wildlife we encountered included cockatoos, a smaller type of parrot, a large black-and-white crow-looking bird, an echidna, and kangaroos. The ticks were plentiful, but the mosquitos were mild. Big, black, biting flies came out to play when we took field showers.

In addition to the expense, it has been just plain hard to get things done in Australia so far: Sunday shut down, minimal camping supplies, no place to get pre-packaged backpacking meals, extremely limited selection of dry goods in grocery stores, hotels fully booked, inability to guarantee bus seats, lack of internet access, etc, etc. Trying to get anything done feels very much like walking through knee-deep mud.

Do I sound frustrated with Australia? Well, I am.

On the plus side, if I was a sports lover, I would find much to entertain me, as three-quarters of the newspapers and television broadcasts are dedicated to rugby, soccer, cricquet, racing, tennis, rowing, etc, etc, etc. Too bad I don’t give a crap about sports, as then I might be satisfied with sitting in front of a TV screen, drinking $9 beers and eating $8 fries. 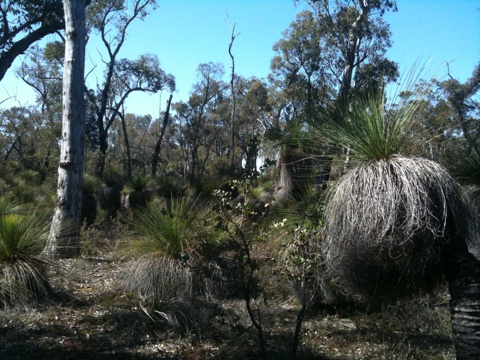