We explored Palua’s largest island for two days, driving the entire perimeter each day, and stopping at a few places.

Babeldaob is sparsely inhabited.  It has rolling terrain and lush vegetation, which reminded us of Costa Rica.  The main road that rings the island is a very good, two-lane, paved highway.  Most intersecting roads are paved for a couple hundred yards before turning into dirt or gravel.  Full exploration of the island would require a four-wheel drive vehicle. 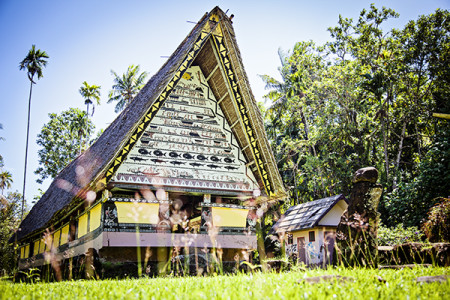 In the state of Airai, we went to the Airai Bai.  We drove around for a while trying to find it, until we were waved-down by a Palauan man walking down a road.  His name was Patrick.  He said that he was the tour guide for the bai, and that another local had spotted us looking all lost and called him.  Patrick took us to the site and gave us a thorough tour of the structure, including an interpretation of each of its carved storyboards.

We hunted for the Odalmelech stone faces in the state of Melekeok.  We could not find them at first, and stopped at a tiny shop in the village of Ulubosan to get directions.  Initially, the lady at the register was abrupt; but smiles and joking broke the ice, and she started laughing.  She pulled the discarded packaging for a carton of cigarettes from a garbage can, and drew a map.  Less than a mile later, we found the stone faces sitting at a road intersection, unmarked and ill-maintained.  They were not particularly impressive.  It was the interaction at the shop that made the hunt worthwhile.

The Palau Capitol Building is also located in the state of Melekeok.  It is new, big, and looks like a merging of the United States’ Capitol building, the Jefferson Memorial, and a Fairfield Inn & Suites.  It is architecturally weird, particularly given its natural surroundings.

We attempted a visit to the Taki Waterfall in the state of Ngardmau, but were thwarted.  The site has been turned into a tourist “eco theme park,” complete with zip-lines and a monorail.  That was more than enough to scare us off.  Anyone who watches South Park knows that zip-lines are “lame.” 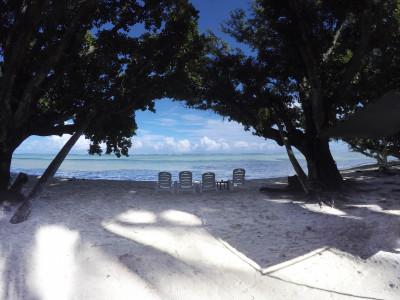 Both days, we went to M&A Eco-Beach Bungalows in the state of Ngaraard.  This resort has a nice, small beach on the eastern coast of Babeldaob’s northern tip.  It is about an hour’s drive from Koror.  Everything at this place has a cost, and not a cheap one, like the US $5 charge for use of a towel.  The restaurant is also overpriced (we paid US $44.80 for two skimpy little sandwiches and a beer each).  But it has that great beach, maybe the best that Babeldaob has to offer.  The beach called, and we came.

Our general impression of Babeldaob is that it is not worth expending much time there, certainly not more than a day.  Unless you are a fanatic about Palauan history; and really want to delve into the intricacies of bais, stone faces, and stone money; there is not much to keep your attention for very long.  There isn’t even decent snorkeling to be had from its shores, which we confirmed with a local dive shop.  There are some old Japanese buildings and defenses remaining from the Second World War; but if you are truly interested in military history, the real draw is the island of Peleliu. 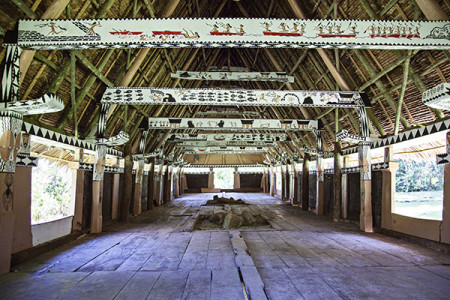 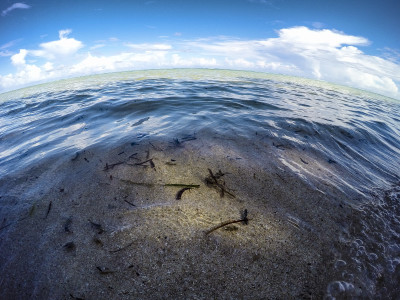 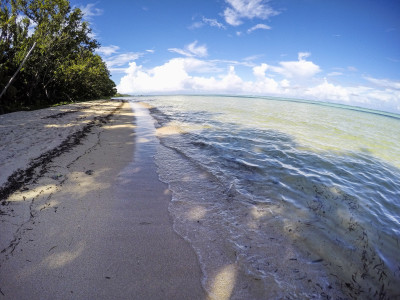