Elephant Crossing is located on the southern end of town, on the river. It consists of a restaurant on the river with both covered and uncovered seating, and a four-story hotel structure.

We arrived in Vang Vieng at the tail end of a tropical storm that had coaxed flooding, including flooding of many of the hotels and guesthouses along the river in Vang Vieng. Elephant Crossing was perhaps the only mid- to upper-range operation that was not flooded, so it was a good choice.

We secured a deluxe room with two single beds which we had to push together to configure as a double (the staff said they couldn’t do it for us). It was advertised as 400,000 Kip a night, but we asked and received a discount for 300,000 Kip a night. That’s pretty pricey by Laos standards, so we expect some truly deluxe accomodations at this rate.

So, what did we get?

The room had two single beds, air conditioning, minibar refrigerator, balcony, and river view. It also had a bathroom with real tub and self-flushing, Westen-style toilet.

Breakfast was included, which consisted of a buffet (things like rice soup, a curry dish, fruit, and bake beans) and an eggs-to-order station. It was more substantial than the breakfast included with most Laotian accommodations.

Downsides were that it was a bit noisy. There were travelers with their young children staying in the hotel, and you could occasionally here them running and screaming (which sucks at 7:00am). There was also a tour group of college-aged kids who came back from a night of parting at zero-dark-thirty, screaming and slamming doors.

And this gives some insight into the customer base – families and tour groups.

And here I will digress a bit…

Vang Vieng is a party spot for college-aged knuckleheads from the UK, Australia, and the States. It is known for drug-laced food and drinks, openly sold in it’s bars and restaurants. The boys walk through the streets without shirts, and the girls with bikini tops and short-shorts (not exactly Laotian street wear). There are also, reportedly and believably, sex workers plying their trade.

Elephant Crossing makes an obvious effort to distance itself from all this buffoonery (the screaming tour group notwithstanding). The room prices are high enough to keep the knuckleheads out, and the house rules directly address the problems that have accompanied the burst of tourism in Vang Vieng.

So, to the credit of Elephant Crossing, they appear to be making an effort to insulate their patrons from the bullshit

But, to continue with negatives…

The maintenance and installations in the rooms are a bit patchy. For example, the conduit for the air condition was exposed as it ran through part of the room, resulting in dripping condensation; and a repair to the ceiling would have been embarrassing to the worst of drywallers.

The hotel restaurant was pricey, and the food unremarkable. OK…unremarkable describes all the food we had in Vang Vieng, but you can pay less at other places for the same unremarkable stuff.

So, what’s the final word on Elephant Crossing? If it were anywhere else but Vang Vieng, I would say it’s over-priced by a half. But since it’s in Vang Vieng, maybe it’s worth the excessive cost to keep some of the teeny-bopper-on-meth crap at arms length. 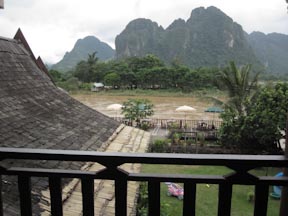 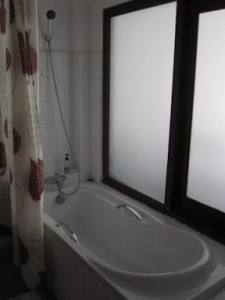 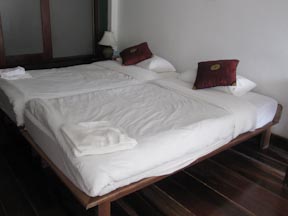