The Mut Mee is an “our pick” in the Lonely Planet guide. After looking at a couple of other places in Nong Khia, we would agree that this might be the best thing going in this town.

The Mut Mee is a compound of buildings of varying design and construction, located on the Mekhong River.

It’s definitely a place catering to Western tourists, with guests from all over globe. It was almost filled to capacity when we were there, and we were the only two guests from the States.

Based upon what we saw, you should make advance reservations for Mut Mee or you might find no rooms available.

Because of an electrical problem, we ended up changing rooms during the middle of the night (and received a deep discount for the inconvenience).

The first room was in an older, wooden, two-story building. It was on the top floor; and it had its own, large balcony. The bathroom was a separate structure from the bedroom, reached via the balcony. It was a water closet design with manual flushing, Western toilet. The room had wi-fi and air conditioning, but no refrigerator.

The second room was smaller, with no balcony or significant patio; although the bathroom was bigger and integral to the room. It was on the ground floor of a one-story building. It also had air conditioning and wi-fi, but no refrigerator.

Both rooms were clean, well-maintained, and bug free. Breakfast was not included in the price for either.

The accommodations are a bit stuffed onto the property, the common areas are close by, and the construction is not particularly soundproof. Consequently, there is a bit of noise carried from room to room.

With some rooms exceeding 1,000 baht a night, this is more a mid-range than a budget operation.

The Mut Mee’s restaurant has outdoor, covered seating. The quality of the food is good, although the dishes are a bit small and over-priced.

Overall, our impression of Mut Mee’s was positive, and we recommend it to anyone staying in Nong Khia. 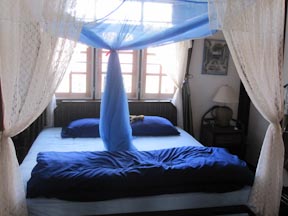 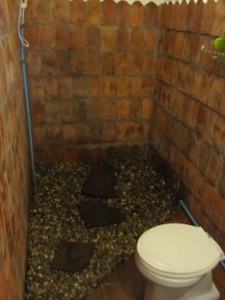 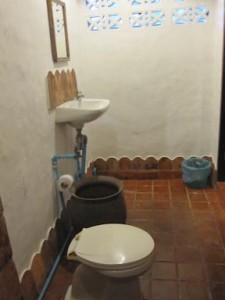 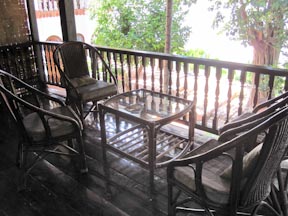