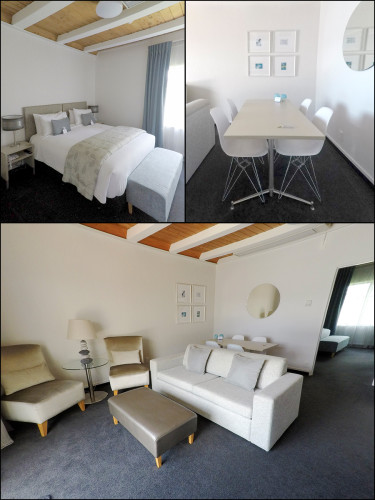 This hotel is located on the waterfront of Lake Te Anau.  It’s an easy walk from the hotel into the town center, where there are several restaurants.

We stayed here two nights, in two different rooms.  Our stays were just before and just after a four-day hike on the Kepler Track.

The first night was spent in a first-floor room.  It was a big accommodation with three separate spaces; more small apartment than motel room.  The outer space had a living area with seating, television, dining area, and kitchenette.  The separate bedroom had a king bed and television.  The bathroom had a toilet, sink, and shower.  The room was extremely clean, well furnished, and comfortable.

We were very pleased with this night’s stay until our upstairs neighbors arrived in the middle of the night.  We could hear everything they did: footsteps, the opening and closing of doors and drawers, water running and draining through pipes, the toilet flushing, their voices.  The lack of sound insulation was annoying to the point that it outweighed all the good things about the room.  We would have cancelled our second night’s stay, but we didn’t have time to make other reservations before starting our hike.

The second night was spent in the upper-floor, end unit.  This room was a bit smaller than the first, but equally nice.  Here we heard no noise from our neighbors.

Radfords on the Lake is one of the more expensive accommodations in Te Anau.  We spent NZ $270 the first night, and NZ $339 the second.  There might be an advantage to the cost in that it probably serves to keep young backpackers at bay — older people tend to be more quiet, and we’ll always pay a premium for quiet.

So, would we stay here again?  That’s uncertain.  We saw other accommodations in Te Anau that piqued our interest, and we would take a closer look at them before making a decision.  Regardless of the alternatives, we would only return to Radfords on the Lake if given an upper-floor room.  That’s really the answer to the question: upper floor, yes; bottom floor, no.