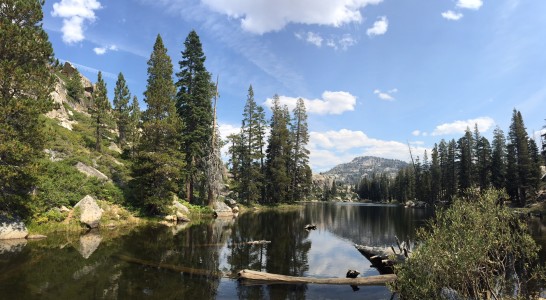 In September 2015, we spent five days backpacking in the Emigrant Wilderness.

The Emigrant Wilderness is in the California Sierras, within the Stanislaus National Forest.  It borders, and is north of, Yosemite National Park.

We started the trip by getting our wilderness permit from the Ranger station in Pinecrest.  From there, we drove to the Crabtree Trailhead, and then hiked to our first campsite at Camp Lake.  Our second day was a hike to Gem Lake, passing by Piute and Deer Lakes along the way.   The third day was a short hike to Upper Buck Lake.   The fourth day was a hike back to Gem Lake, taking a route to the south and parallel of the one we used to enter the wilderness, and passing by Wood Lake.  The fifth day was a longer hike back to the Crabtree Trailhead, again using the southern route, and passing by Grouse Lake along the way.

If you look at a map of the Emigrant Wilderness, you will see that it is splattered with small lakes.  It seems that there is a lake every couple of miles along the established trails.  All but one of the lakes we saw were a thing of beauty (the exception was Grouse Lake, which was littered with cow manure).

Always having a lake nearby allowed us to cut the water we carried to just a liter each, plus a water filter.

I tried my hand at fishing.  I had no luck at Camp Lake (although I could see fish hitting the surface of the lake), got a pretty good strike at Deer Lake, hooked and then lost a large trout at Gem Lake, and easily caught four trout at Upper Buck Lake.

We encountered other backpackers four out of five days, but the traffic was light, probably due to the Summer season being over.   Of the three places where we camped, we had company only at Gem Lake.

There are horse and pack animal operations that frequent the Emigrant Wilderness.  Consequently, piles of horse manure litter the trails.  This was not an issue when things were dry; but after a night of heavy rain, the manure mixed with the mud and puddles, and was somewhat unpleasant to walk through.

We never had a problem finding a suitable campsite, already outfitted with a rock fire ring, and sometimes even an improvised bench seat.   We also had no problem finding enough deadfall to build a fire for cooking.   As a result, we did not need to use the stove that we brought.

Two fire-related things are worthy of additional comment.  First is that the Emigrant Wilderness is not subject to the same fire restrictions as the rest of the national forest.  There are really no restrictions below 9,000 feet of elevation, other than minimum distances from the lakes.

The second thing worth comment is the prevalence of sap-rich deadfall.   This is what we called “lighter pine” when I was a kid in Louisiana.  It smells like turpentine, lights easily, and burns long and hot.  Even when the deadfall is wet from rain (which happened to us on the fourth night), you can get “lighter pine” to burn by whittling down to the dry wood, carving out a pile of dry shavings, and using this as your tinder. P ile some small pieces of wet “lighter pine” on top, apply a match, and you are off.  The dry tinder will burn long and hot enough to get the sap in the wet pieces to ignite.   And when you leave, stick a piece of “lighter pine” into your pack for use on your next backpacking trip.

There is a good deal of cross-compartment movement involved in a trip to the Emigrant Wilderness, and the elevation gains and losses can be real work.   The trails have been groomed with stones to direct water, and with stones that serve as staircases in some places; but  much of this is not a match to a normal sized step.  Consequently, ascents and descents can feel more like climbs than hikes.

A third or more of the trails we used were covered with loose rocks, which made for a real risk of ankle injury.  We spent much of our time looking down at our next foot placement, rather than looking up at the scenery.

Overall, we averaged just over two miles per hour in distance made good.

The trip gave us additional insights into some if our gear. You can read these in the following equipment reviews: 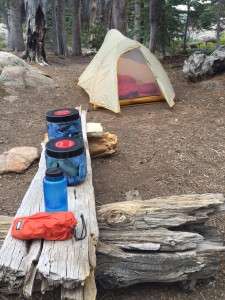 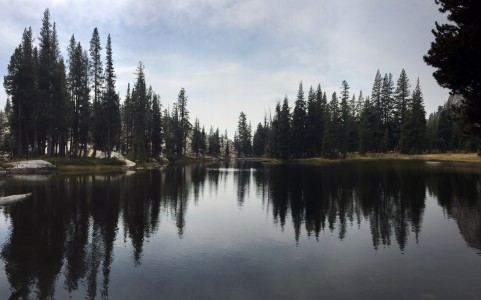 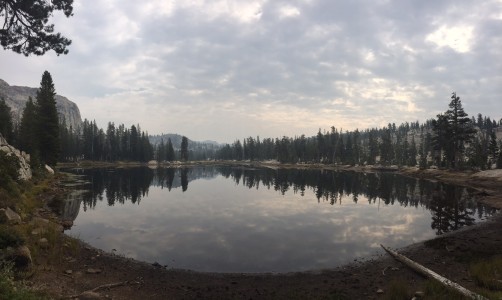 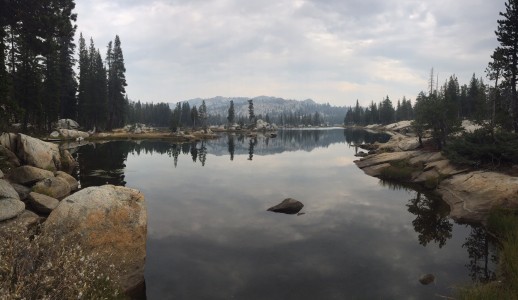 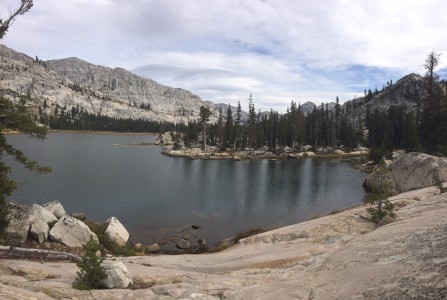 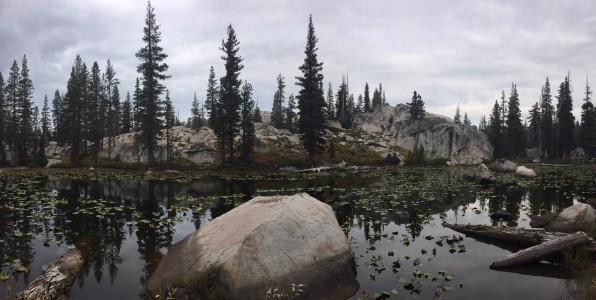